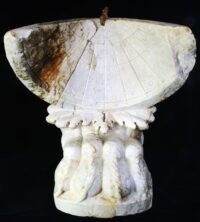 Archaeologists have unearthed a Roman-era marble sundial at the ancient site of Aizanoi in modern-day Çavdarhisar, eastern Turkey. It is the first sundial ever found in Aizanoi and dates to the early imperial period, around 2,000 years ago. Made of white marble, the sundial is almost intact with only a few missing fragments. It is 18 inches high and 17 inches wide and beautifully preserved with all its original lines and inscriptions. The dial curves over an acanthus leaf base on top of a pedestal in the shape of animal paw.

The sundial emerged in an excavation of the Roman bridges and bank walls on the river (the Penkalas in antiquity; today known as the Kocaçay) which ran through the middle of the ancient city of 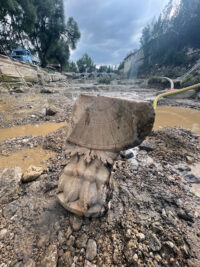 Aizanoi. The project’s ultimate aim is to raise the water level of the river enough to run boats between the two bridges. Since 2019, archaeologists have been removing stones, sculptures and other architectural features that over the centuries had accumulated on the riverbed and bank. More than a thousand shaped and carved stones — headless statues, bodiless heads (none of them matching), blocks from the balustrades and parapets of the bridges — have been recovered so far.

In antiquity, sundials were installed in public spaces like the city agora or temple precinct so people could tell time, serving as town timekeepers. 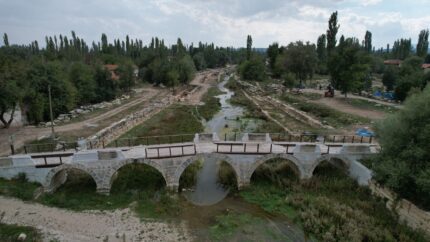