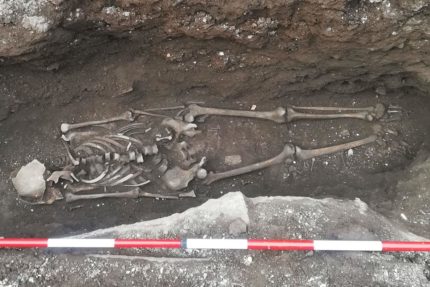 The skeletal remains of a mother and infant from late antiquity have been discovered in advance of utilities work in front of the Piramide Metro station in Rome. Preventative excavation in the Piazzale Ostiense where new lighting will be installed revealed the skeleton of a woman with tiny bones of an infant placed at the height of her hip. Osteological examination of her pelvis suggests she had recently given birth.

Archaeologists believe she died in childbirth and was buried with her newborn or stillborn baby. She was around 30 years old. A number of iron nails were found in the burial, all that’s left of a wooden coffin that has now rotted away. 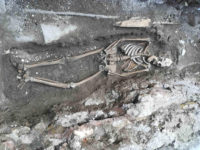 Another burial was discovered at the same site on September 20th, that one of a man who was between 30 and 39 years old when he died. Located on the via Ostiense, the ancient consular road connecting Rome to its sea port city of Ostia, what is now the square in front of the subway station was the site of Ostiense necropolis, a burial ground first built in the 1st century B.C. whose most famous denizen is the Pyramid of Gaius Cestius, constructed ca. 12 B.C. It was well outside the Servian walls of the Rome back then, and continued to be used as a necropolis even when the Aurelian walls were built in the 3rd century and the Porta Ostiensis (today Porta San Paolo) gate marked the new starting point of the via Ostiense.

The necropolis was still in use in late antiquity, but it was no longer the kind of place where a wealthy man would built himself a very pointy, very white pyramid as a funerary monument. In the 4-6th centuries, it was used by the poor and the burials reflect the modest means of the interred.

Neither the grave of the adult man nor that of the mother and child were found to include any grave goods. They have been interfered with — perhaps looted in antiquity, certainly damaged by later construction — so it’s possible they were buried with objects that were lost.

They both are believed to date to the 4th or 5th century, but the bones will have to be radiocarbon dated to confirm. The remains have been recovered and will be studied further.