An early grave of a Scythian warrior buried with a golden sword has been unearthed in the Mount Mamai cemetery near the village Velyka Znamyanka in Zaporizhia Oblast, central Ukraine.

Archaeologists exploring a small tumulus found a trench with animal bones and fragments of clay amphorae. There are characteristic Scythian funerary offerings. They then unearthed two graves within the mound: a large

central one and a smaller one on the periphery. The central burial had been thoroughly looted in antiquity and archaeologists were only able to recover one arrowhead and some bone fragments. The remains suggest the occupant of this grave was an elderly male.

The accompanying grave had also been interfered with it, but it still contained the skeletal remains of a young man about 18-20 years old. He was interred with a rare large grey clay amphorae, fittings from a horse’s bridle, an iron battle axe, bronze and bone arrows and the star of the funerary show: an akinakes (a Scythian dagger or short sword) with a gold plated scabbard, a grip with a leaf motif and a cross-guard with granulation details.

Not only had the young warrior been buried together with his weapons, but also with some ornaments; the archeological team found beads made of glass paste, a red deer tooth necklace, a gold earring and a gold pendant with chalk inlay.

The Mount Mamai burial grounds, the largest barrow cemetery in the region and one of the largest in Europe, has been excavated for 32 years, a long-term salvage operation to recover as much archaeological material as possible before the site is destroyed by erosion from the construction of the Khakhovka Reservoir. Already a quarter mile of the shore has fallen into the lake in just three decades, so archaeologists are fighting a battle against time. Artifacts and remains dating as far back as the Neolithic era through the Middle Ages have been unearthed there. Of the 700 burials thus far excavated, around 400 are Scythian.

The discoveries made this season are so exceptional the 32nd dig has been dubbed the most successful yet. The very fine grave goods would be more than significant on their own, but the burial is even more notable because it dates to the 6th century B.C., making it the earliest Scythian burial found at Mount Mamai and extending the window of the cemetery’s usage during the Scythian period. The other Scythian tombs that have been excavated there are at least two centuries older.

The objects have been cleaned and will be conserved at the Museum of Local History in Kamianets-Dniprovsky. 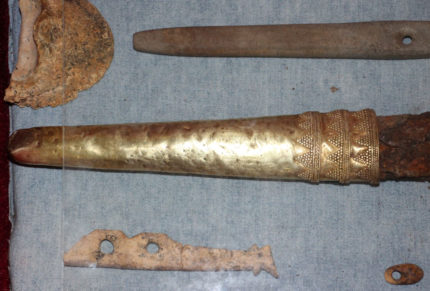