The first round of research into the Galloway Hoard, the richest and most varied Viking hoard ever discovered in Britain or Ireland, has revealed a name and it’s an Anglo-Saxon name, not a Viking one.  Five of the silver armbands in the hoard have runes etched on them. Runic scripts are varied, complex and were used for several different languages so interpreting them can be challenging. Dr. David Parsons of the University of Wales was able to decipher the Old English runes inscribed on one of the silver arm-rings. They read “Ecgbeorht,” an ancient spelling of the name “Egbert.” 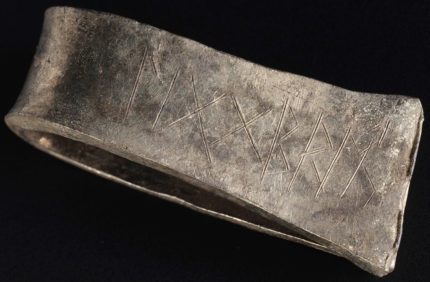 “Five of the silver arm-rings have runic inscriptions scratched into them which may have functioned as labels identifying distinct portions of the hoard, perhaps recording the names of the people who owned and buried them. Arm-rings of this sort are most commonly associated with Viking discoveries around the Irish Sea coastlands. Yet these runes are not of the familiar Scandinavian variety common around this date on the nearby Isle of Man, but of a distinctively Anglo-Saxon type. And while several of the texts are abbreviated and uncertain, one is splendidly clear: it reads Ecgbeorht, Egbert, a common and thoroughly Anglo-Saxon man’s name.

There is some reason, therefore, to suspect that the Galloway ‘Viking’ Hoard may have been deposited by a people who, to judge by name and choice of script, may have considered themselves part of the English-speaking world. It is even possible that these were locals: Galloway had been part of Anglo-Saxon Northumbria since the early eighth century, and was referred to as the ‘Saxon coast’ in the Irish chronicles as late as the tenth century.”

he fact that a man’s name was etched into one of the 100 pieces in the hoard does not mean he’s the person who assembled it and/or buried it, notwithstanding the plethora of current headlines hyping Egbert as the hoard’s owner. The three abbreviated Anglo-Saxon runic inscriptions also seem to have been names, and the fourth one which has yet to be deciphered could be one too, so it’s not about the “owner of the Galloway Hoard found,” but rather evidence in favor of Anglo-Saxon speakers having had their hands on at least some elements of this hoard before it was buried in the early 10th century.

“If the hoard belonged to a person or group of Anglo-Saxon speakers, does it mean they were out raiding with other Vikings? Or that these Viking hoards were not always the product of Scandinavian raiders? There are other explanations, but either way this transforms our thinking on the ‘Viking Age’ in Scotland.

“These inscriptions are evidence that identity was complex in the past, just as it can be today. In Early Medieval Scotland, we have inscriptions in five different scripts (Latin, ogham, Pictish symbols, Scandinavian and Anglian runes) making it a diverse and multilingual era. Place-names in British, Gaelic, Norse and Old English were being coined in South West Scotland around the time of the Galloway Hoard.  The sea was more like a motorway, allowing people to communicate across linguistic boundaries, exchanging ideas and objects. This is just a glimpse of how the Galloway Hoard will continue to challenge our thinking as conservation continues.”

The Hoard is not on display as conservators and researchers work on it. Next spring will kick off a new exhibition tour at four museums in Scotland beginning with the National Museum of Scotland in Edinburgh in May.

Meanwhile, the Galloway Hoard is at the center of a whole different kind of show right now, a courtroom drama, if you will. You might recall that back in 2017 when National Museums Scotland announced that it had raised the $2.5 million for the ex gratia payment to secure the hoard, the award was going to be split down the middle between the finder, metal detectorist Derek McLennan, and the owners of the field where the hoard was found, the Church of Scotland. Well two years have passed, and not only has the Church not received a penny of those millions, McLennan has full on ghosted them. They can’t even reach him on the phone.

It turns out that everywhere else in the UK, the Treasure Act stipulates that awards are to be split between finder and landowner, but in Scotland all payment divisions are solely at the discretion of the finders. The widely accepted practice among metal detectorists is the 50/50 split because it encourages landowners to grant them permission to search their land. No place to look, nothing to find. A partnership relationship benefits everyone.

According to the Church of Scotland, this agreement was formalized between both parties when the National Museums Scotland raised the funds. They would split the proceeds and the Church would use its share “for the good of the local parish.” A year later, the Church reached out to Reverend David Bartholomew, a metal detectorist friend of McLennan’s who had been with him the day of the find, asking him to find out what was up with the moneys because he wasn’t responding to their attempts to contact him. So then Bartholomew tried calling, emailing, writing letters and even showed up at his house, all to no avail.

The Church of Scotland has now filed suit. McLennan has not responded to any requests for comment from the media. 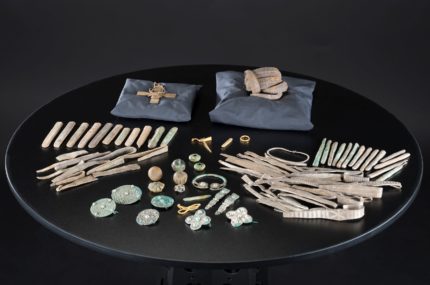