The hoard was found by VejleMuseerne archaeologist Kasper Terp Høgsberg who was searching the area where individual coins had been found earlier: four of them in March 2017, another in August 2018 and another in September of this year. The finders had turned them into the museum, and after the most recent discovery, Høgsberg decided to investigate the site with a metal detector. He was astonished when his detector started signalling over and over and he quickly found coin after coin just under the surface.

“It felt completely unreal. It is a once-in-a-lifetime thing to find such a treasure. It will never happen again in my career as an archaeologist!” said Høgsberg.

“I thought I was going to find a lost purse with 20 coins along a road, but it just kept going until I eventually had hundreds of coins.” 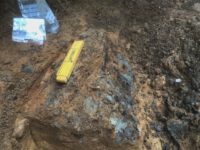 To get an overview of the walking trail and perhaps find a central location where a hoard might have been buried, Høgsberg scanned along the path. A little ways up on a slope, the detector gave a strong signal. The archaeologist called in a colleague and together they dug out a large block of soil for removal to the Conservation Center in Vejle. As they dug around the area indicated by the detector, they found fragments of pottery and textile with coins still attached to them. This was how the hoard had been buried: wrapped in a cloth and placed in a vessel.

In total, they discovered 803 loose coins, 80% of them silver, 20% copper, along the path and an estimated couple of hundred still ensconced in the burial pot. That’s not counting the six individual ones found over the past two years or any other random finds people might have picked up while strolling through the woods. The museum has made a call to the public to turn in any coins found in the park. 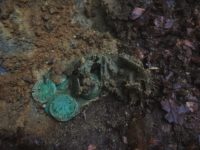 Most of the coins were minted in Hanseatic League cities in Germany around 1400. There are also some Danish coins of yet-to-be-determined dates and one that has been dated to 1424. That is the most recent coin of the ones that have been examined, so the hoard had to have been buried after that. In the first half of the 15th century, Erik of Pomerania ruled Denmark and there were significant conflicts, some escalating to full-blown wars, between Denmark and the Hanseatic cities of northern Germany. Nonetheless, the Hanseatic League remained Denmark’s main trading partner throughout the period, hence the high number of German coins in the hoard.

While it’s difficult to do any direct conversion of currency from 600 years ago, in terms of buying power all the silver coins in the hoard could have bought 10 cows or supported a farmer’s family for more than a year.

The 803 loose coins will go on temporary display at the Spinderihallerne Culture Museum in Vejle this autumn. The coins still attached to the surviving textile and pot are currently being excavated and conserved.