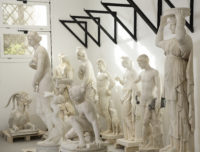 After years, decades, even centuries of teases, talks and legal proceedings that went nowhere, a selection of ancient marbles collected by the princely Torlonia family will go on display early next year. Ninety-six of the 620 Egyptian, Greek, Etruscan and Roman sculptures in the famed Torlonia Collection have been cleaned and conserved and will be exhibited in The Torlonia Marbles. Collecting Masterpieces at the Palazzo Caffarelli on the Capitoline. The exhibition runs from March 25th, 2020 through January 10th, 2021.

Culture Minister Dario Franceschini announced in 2016 that a deal had been struck to exhibit 60-90 of the most important pieces in the collection in early 2017. As it is now almost the end of 2019, obviously those best laid plans ganged most aft a-gley. The delay was just the latest skirmish in a decades-long battle between the Torlonia family and the government that began when Prince Alessandro Torlonia closed the museum on the Via della Lungara in Trastevere to “repair the roof” in 1976. When work was completed, the entire building had been illegally subdivided into 98 apartments.

The collection suffered the consequences. It was shoved willy-nilly into a warehouse, statues leaning against each other at random and left to collect dust. The government took the family to court and in a 1979 decision, a fine was assessed for the crime against cultural patrimony in the amount of the collection’s value. The judgment was never enforced.

All attempts over the next four decades to get the Torlonia to donate or sell the collection to the state, or even just hose it down once in a while and put it on public display, failed. The 2016 announcement seemed to be the long-awaited breakthrough, but when Prince Alessandro died in 2017 the plans hit a snag while the terms of the will were sorted out. He left the collection to the Fondazione Torlonia, the foundation he established in 2014 to preserve the marbles and the Villa Albani Torlonia.

Acquired in the 19th century mainly from nobility in financial distress and construction works on the family’s property in Vulci, Cervetri, Portus and Fiumicino, the Torlonia Collection is the largest private collection of ancient art in the world. The statuary was installed in the a former granary on the Via della Lungara in 1875. It was a private museum, never open to the general public, only to select visitors and scholars.

News of its quality and quantity spread via published catalogues. The 1884 catalogue of the Torlonia Collection compiled by Carlo Lodovico Visconti lists 615 statues, reliefs, portrait busts, monumental vases and sarcophagi, all of them photographed by the Danesi firm and published in the accompanying volume of plates. This was one the earliest catalogues to be published with pictures instead of drawings, and the first to photograph every single piece in the collection. It would become indispensable a century later when preeminent art historian of antiquity Carlo Gasparri retraced the ownership history of each of the

sculptures in the collection, filling the gaps in the record to create a concordance between the Torlonia inventory and the catalogues from the collections of much older noble families acquired by the Torlonia. Even today the 1884 catalogue remains an essential reference to the Torlonia sculptures and was used by the curators and conservators working on the new exhibition.

The 96 pieces that will go on display next year were conserved with financial support from jewelers Bvlgari. They were in good condition, in need of cleaning more than restoration. After the exhibition on the Capitoline, the group will go on a world tour of museums, dates and venues to be determined. By the time they come back to Rome, the goal is to have a permanent home for the entire collection to be open to the public for the first time in its existence.