Archaeologists have discovered a 3,000-year-old Assyrian seal cylinder in Turkey’s  southeastern Diyarbakir province. The seal was unearthed in an excavation at Zerzevan Castle, the ruins of a military base built by the Byzantine Empire in the 4th century.  The seal was discovered 13 feet under the surface of a field close to an underground Mithraeum that dates to the castle’s early days as an important military base. (Mithraism was extremely popular among soldiers who established the cave sanctuaries characteristic of the mystery religion all over the Empire.)

The seal has a unique inscribed godlike figure as well as a tree of life, a bird, and holy water in a vessel to nourish the tree of life, showing the importance of the seal, [noted Aytaç Coşkun, head of the excavation team].

Seals were often used in the ancient world to authenticate the source or authority of an object or document.

In continuous use as a military fortress until the Muslim conquests began in the 7th century, Zerzevan Castle protected the strategically important location on the ancient trade route between Amida (modern-day Diyarbakır) and Dara (modern-day Mardin). Major battles of the Byzantine–Sasanian wars (which continued off and on from 285 to ca. 628 A.D.) were fought at this site. At its peak, the castle covered 14 acres and included a civilian settlement with private homes, an extensive water system with canals and cisterns, a palace, an administrative building, a granary, arsenal, pagan sanctuaries and, later, a Christian chapel. The extensive ruins of the castle would house a small community again from the late 19th century through the 1960s when a village was founded in its environs. Archaeological excavations at Zerzevan Castle began in 2014 and have continued every year since.

This year’s excavation has born rich archaeological fruit. In addition to the seal, numerous bronze artifacts were found the date to around the same period. This suggests that the site was in use long before the construction of the castle in the 4th century, that there was an Assyrian presence, perhaps a fortified structure, perhaps a settlement, there before the Eastern Roman Empire was a twinkle in Constantine’s eye. 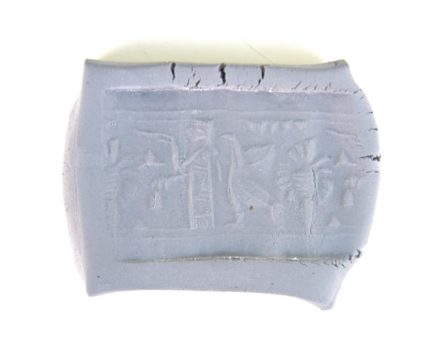