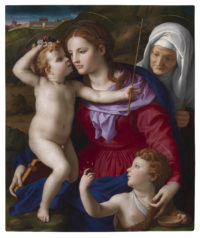 The Getty Museum has acquired a painting by Agnolo Bronzino that has been in private hands for years, for many centuries incorrectly attributed, and never on public display. It was exhibited publicly for the first time in almost 500 years on Thursday.

Virgin and Child with Saint Elizabeth and Saint John the Baptist was painted between 1540 and 1545 at Cosimo I de’ Medici’s court in Florence. It is a vividly colored tableau of the Virgin Mary, Christ Child, senior St. Elizabeth and junior John the Baptist. The marble-smooth, luminous quality of the skin, the glossy surface are characteristic of Bronzino’s style. He was influenced by the sculptures of Michelangelo and revival of Classical sculptural styles embraced by artists like Michelangelo and this work is an example of him at the apex of his career.

A second version of the present work was bequeathed in 1941 by Sir Lionel Faudel-Phillips to the National Gallery, London. Its provenance cannot be traced before its appearance in 1916.

Bronzino is known to have created multiple versions of the same composition on several other occasions. He maintained that changing luminosity to mimic different times of the day allowed the viewer to appreciate different tones and colors, while requiring few changes or adjustments to the composition itself. The painting in London and the work now at the Getty are set at night and at dawn, respectively. The moonlight of the picture in London enhances the concision of the forms, while the diffused light of the dawn intensifies the bright, contrasting colors in the Getty painting. 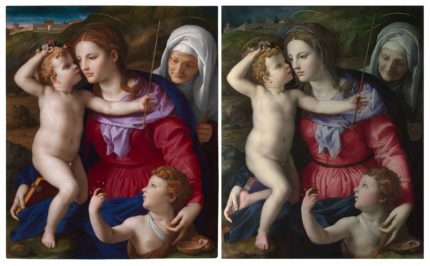 This version of the painting first appears on the historical record in 1898 when it was sold in Milan. It was misattributed to Andrea del Sarto. It was sold into private hands and fell off the radar until 1964 when it appeared in a London sale. This time it was correctly attributed to Bronzino, his signature having been found in the lower left of the work. Again it was sold to a private collector and would only be published in 2016. Now it has been bought in yet another a private sale, only this time the buyer is a museum. 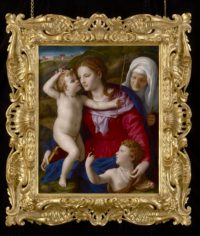 Before it was put on display in Gallery N204 in the Getty Center’s North Pavilion, the painting and its gilded auricular frame were examined by conservators. The oil-on-panel was determined to be in an excellent state of preservation allowing it to be placed on view very quickly. If you’d like to learn about the Getty’s new Bronzino, senior curator of paintings Davide Gasparaotto will be hosting a Facebook Live event about it on Wednesday, October 9th and 9:30AM PT.