A gripping fresco of gladiatorial combat has been discovered in the excavation of Pompeii’s endlessly awesome Regio V neighborhood. The scene depicts two gladiators at the very end of what must have been a vigorous battle as the loser is a veritable fountain of blood.

On the left is a murmillo-class gladiator kitted out with a gladius (a double-edged short sword), a manica (a segmented arm guard) on his right arm, a scutum (long rectangular shield), an ocrea (shin guard) on his left leg, and a richly beplumed or horsehaired cassis crista (full-coverage helmet with face grill and crest). He stands tall, holding his shield aloft and sword at the ready.

On the right is his opponent, clearly defeated. His is a Thraex or Thracian type gladiator. Thracians were often pitted against murmillos as they were similarly armed with a short sword, a shield (albeit a shorter one) and full-coverage crested helmet. This Thracian has high shin guards on both legs and his shield is on the ground behind him. Blood pours from wounds on his chest, groin and wrist. He isn’t on his knees quite yet, but they are bent. His left arm is outstretched with his finger pointing in what looks like the adlocutio gesture, customarily done with the right arm by a general, the emperor or magistrate running the games to concede grace. Clearly the murmillo has won this bout; the Thracian’s gesture was likely a plea for mercy. Whether our Thraex friend was dealt a final blow or was granted grace for a fight well-fought, we’ll never know.

Another Pompeiian depiction of a battle between murmillo and Thracian is helpfully labeled. The graffiti stick-drawing tells us that the murmillo, a first-time fighter named M. Atillus, defeated the Thraex, L. Raecius Felix, but that Felix, who was previously undefeated with a record of 12 fights and 12 victories, was granted missio (ie, his life was spared).

The fresco was found in a building at the back of the intersection between the Alley of the Balconies and the Way of the Silver Wedding. The wall is trapezoidal and was located under a staircase. The steps are gone, but you can see the impression of where they used to be on the wall above the fresco. On the adjoining wall is a  fragment of another fresco depicting a man in a yellow tunic.

It was probably a shop or a tavern frequented by gladiators — the gladiators’ barracks were nearby — with the second floor either housing the owners’ living quarters or rooms where prostitutes took in customers. Sex workers were often associated with gladiator haunts. 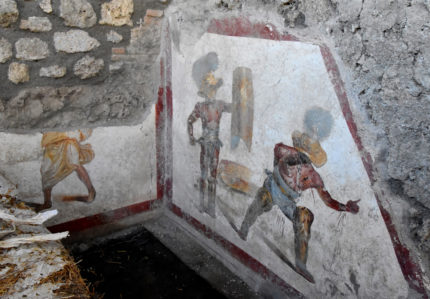