The Roman Catholic Archdiocese of Dublin has donated an early medieval hand-bell believed to date to the 8th or 9th century to the National Museum of Ireland. The bell is something of a mysterious object and little is known about its ancient and recent past.

The Knockatemple Hand-Bell was discovered in 1879 at the site of a ruined church in Knockatemple near Glendalough Co. Wicklow. Dr. W. Frazer announced to the Royal Irish Academy on May 26, 1879, the results of the excavation on behalf of Mr. Henry Keogh of Roundwood House who explored the ruins of the church that year.

“This church is situation in the parish of Newcastle, Co. Wicklow, near Roundwood, and in the vicinity of the Vartry Water Reservoir. There appear to be no reliable records of its foundation or destruction, which is so complete that its walls were level to the ground, and what remained of it required to be cleared out of clay and rubbish for two or three feet before the flooring was reached. It must have been a large building, 50 feet long and 26 feet wide, with two side aisles 9 feet wide in the clear, and 26 feet in length, which from the plan may have been of later erection that the church itself. It was disposed east and west, and the floor, which was on the south side, was 4 feet in width. The aisles as well as the central portion of the church were paved with large flat stones, and in one of the aisles to the northward was what Mr. Keogh conjectures to be the remains of a stone altar situated in the east of the building; but he could find no trace of an altar in the body of the church itself. […]

The large square-shaped bronze bell…, measures 12 inches high, and 8 inches across. It was found at the east end of the church, about two feet under the surface, near the position the altar would occupy. It had a handle, which was broken off by the workmen in excavating it…. They also damaged one part of the top of the bell with a pickaxe. Mr. Keogh has polished a corner of it, and it consists of fine bronze made in two portions, the halves being rivetted together.

There was no indication as to the age of the bell noted in the 19th century records. The only artifacts recovered in the 1879 excavation with absolute dates were two coins of Henry III of England (r. 1216-1272) and Alexander II of Scotland (r. 1214-1249) found in burials in the clay and debris layer, so either disturbed church burials or post-destruction interrals.

The bell’s history after its excavation is obscure too. The Archdiocese has owned it since the 1920s. They believe it was bought at auction by a priest of St Mary’s Pro-Cathedral, the episcopal seat of the Archbishop of Dublin, in 1915. In 1927, the discovery of the bell was recorded in The Deaneries of Arklow and Wicklow a paper by V Rev. Myles V. Ronan published in the Journal of the Royal Society of Antiquaries of Ireland. Ronan’s description differed slightly from Frazer’s in that he recognized the bell was made of iron with “traces of bronze plating.” 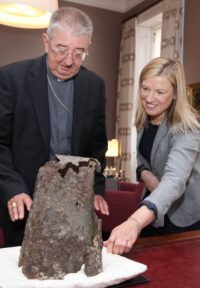 The Archdiocese wasn’t actively aware of the delicate historic treasure in its care until Cormac Bourke a curator of Medieval antiquities at the Ulster Museum, Belfast, tracked down the bell through the records and reached out to the Diocesan Archives a few years ago. Realizing the artifact needed special conservatorial experience, Archbishop of Dublin, Diarmuid Martin, wrote to the National Museum of Ireland telling them about the bell and offering to donate it to the National Collection of historic hand-bells.

Archbishop Martin officially presented the Knockatemple Hand-Bell to Maeve Sikora, Keeper of Irish Antiquities at the NMI, on September 26th.