An ancient Roman-era necropolis has been unearthed at the gates of Narbonne in Occitaine, southwestern France. Archaeologists from the National Institute for Preventive Archaeological Research (INRAP) excavated the site prior to development and discovered a burial ground covering half an acre that was in active use during the 1st and 2nd centuries A.D. So far they have unearthed 300 tombs of an estimated 1,000.

Colonia Narbo Martius was the first Roman colony in Gaul, founded in 118 B.C. along the Via Domitia, the first Roman road in Gaul which linked Italy to the Iberian peninsula. They made a deal with the Greek colony of Massalia (modern-day Marseille) to acquire the land for the road and the new city founded at the important crossroads would prosper through trade, eventually eclipsing Massalia, which was conquered by Caesar in 49 B.C., and becoming the capital of the province of Gallia Transalpina. Indeed, the province would be renamed Gallia Narbonensis after its prosperous capital city.

The necropolis was located at the crossroads of two Roman roads just over a third of a mile east of the ancient city’s perimeter. It was designed in parcels, with masonry enclosures structured in specific groups. The groups, some of which border each other openly, others of which are divided by service roads, are characterized by small funerary monuments decorated with painted plaster and inscribed plaques. The inscriptions provide names and status — free or enslaved — of the deceased and attest to the largely Italian origin of the city’s residents. This was the cemetery of Narbo’s urban population, not the tombs of the elite, but the layout, construction and fine grave goods are evidence of widespread prosperity.

Most of the remains are cinerary, burned bones and ashes on pyres or enclosed in ceramic vessels placed on tiled or paved platforms.  They are often accompanied by delicate glassware — small bottles, unguentaria — and ceramic jugs and lamps. Charred organic remains from burned offerings have been identified, including of figs and dates. Personal items like jewelry and protective phallus amulets were discovered among the ashes.

The condition of the graves is exceptional. A tributary of the Aude river used to run nearby and layers of silt from regular flooding protected the remains. Archaeologists dug through 10 feet of alluvial silt, each successive

flood sealing different burial phases and giving the team the chance to establish a chronology of the stages of use of the burial ground, the evolution of funerary rites and religious beliefs.

The state of preservation allows us, for once, to understand some of the ritual gestures; at the time of the funeral, at the pyre or in the grave, as well as in the context of the memorial practices, through offerings in honor of the deceased or meals consumed in the enclosures.

Rarely attested in Gaul, libation conduits were used in one out of three graves at Narbonne. Extending above the ground, these conduits are ceramic, sometimes amphorae, driven into the tomb to get closer to the deceased. They allowed the introduction of offerings. Some still contain cups used for libations and shells. The studies of them focus on identifying the libation practices through organic chemistry analyses.

The diversity of the funerary structures, their state of preservation, and the superimposition of floors and tombs make this a unique site in Gaul, which can be compared with sites in Italy, such as Pompeii and Rome. It offers a very rare opportunity to understand funerary practices in time and space. The Narbonne necropolis is already considered as a main source in the study of funerary practices in Roman Gaul, as well as for our knowledge of the working class in Antiquity. 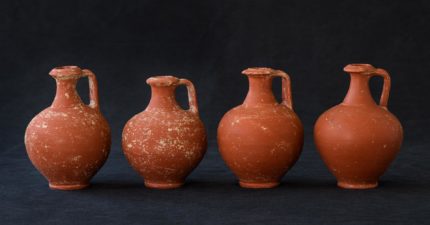