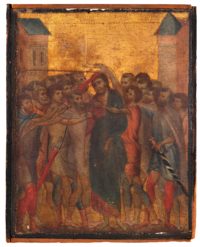 Cimabue’s Christ Mocked, discovered in an elderly lady’s kitchen in Compiegne, France, has sold at auction for a hammer price of 19.5 million euros, 24 million euros ($26.6 million) including fees. The pre-sale estimate for this 13th century masterpiece by an artist whose exceedingly rare work has literally never come up for auction before was $6.6 million, so yeah, to quote Jon Lovitz in A League of Their Own, well then, this would be more, wouldn’t it?

Dominique Le Coent of Acteon Auction House, who sold the masterpiece to an anonymous buyer near Chantilly, north of Paris, said the sale represented a “world record for a primitive, or a pre-1500 work.”

“It’s a painting that was unique, splendid and monumental. Cimabue was the father of the Renaissance. But this sale goes beyond all our dreams,” Le Coent told The Associated Press. […]

Le Coent said experts were off the mark because it was the first time a Cimabue had ever gone under the hammer. “There’s never been a Cimabue painting on sale so there was no reference previously on how much it could make,” he explained.

The Acteon auction house has not revealed the identity of the buyer but did note that a “foreign museum” was among the bidders. Indeed, it would be astonishing if there weren’t more than one museum amongst the would-be buyers. There are only 11 known Cimabue paintings in the world, all in museums. There aren’t going to be any other opportunities to make a score like this.

The former owner, who is her 90s and was selling her home and all its contents, is now a millionaire 20 times over. The rest of her stuff sold for 6,000 euros. Everything that wasn’t deemed salable got carted off to the dump. Had the auction appraiser not spotted the little tempera-on-poplar-panel 10×8-inch piece hanging on the wall over the hotplate and thought it might be worth a few hundred thousand as an Italian primitive original, that Cimabue could have suffered the same fate.