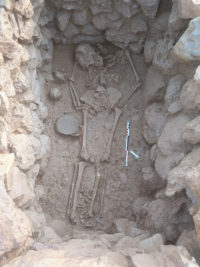 Archaeologists excavating the ancient settlement of Sisi in the Municipality of Agios Nikolaos, eastern Crete, have unearthed the intact grave of a woman from the Late Minoan era (1490-1360 B.C.). These types of tombs are extremely rare in Crete. They have only been found before in Knossos and Chania.

The artfully crafted box tomb, built in a rectangular shape with high stone walls, was discovered inside an earlier building from the Neopalatial period ( 1750-1490 B.C.) which was built for funerary purposes and used as such in later periods as well. Inside the tomb was the articulated skeleton of an adult woman buried with elegant grave goods: a bronze mirror with an ivory handle, bone and bronze accessories and a necklace of 15 large olive-shaped gold beads alternating with 15 small gold beads. 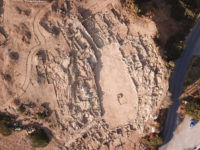 Built around 2600 B.C., the Early Minoan settlement was abandoned for mysterious reasons. The people left everything behind, but shortly thereafter a monumental building was constructed east of the village. It burned down in 2500 B.C. Its remains were incorporated and reused 800 years later in the construction of a monumental courtyard.

This is the 10th season of excavations in Sissi, led by the Belgian School of Athens and fielding more than 100 archaeologists from many countries. With such a deep bench, the team was able to work in several important areas of the site, including the central monumental courtyard complex and the west wing of the complex. Excavations have revealed a decorated mortar floor and a 109-foot long clay pipe that drained water away from the central courtyard to the eastern slope of the hill.

In the surrounding area, remains were found from other periods that are less known to archaeologists. Among them are the ruins of a house from the Meso-Minoan IIIA period which were destroyed, perhaps in an earthquake, and a rich layer of Late Minoan pottery that was heavily influenced by the Knossian style. 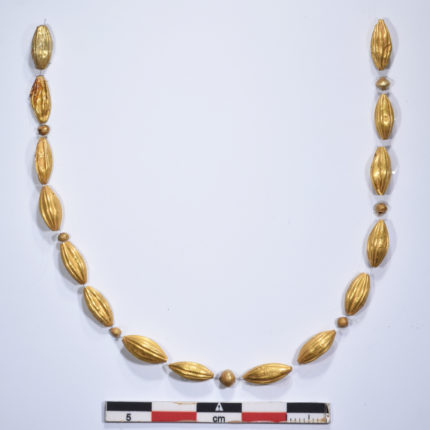 Edit: This was supposed to have been posted on Friday, but something went awry with the scheduling ’cause I just found it hanging out here in drafts filing its nails and eating bon bons. OFFENSIVE. Even though I hate gaps in my calendar with the fire of a billion hot suns, I can’t in good conscience backdate it to fill in the gap three days later, so I am submitting it now. But I do so under protest!