The oldest pearl in the world is going on public display for the first time at the Louvre Abu Dhabi. It was discovered in 2017 at the site of a Neolithic settlement on Marawah Island off the western coast of Abu Dhabi, United Arab Emirates (UAE). The pearl was radiocarbon dated to between 5800 and 5600 B.C. The lustrous natural pearl is less than three millimeters in diameter and is a pink in tone. It was found on the floor of a stone structure.

Mohamed Khalifa Al Mubarak, Chairman of [Department of Culture and Tourism] Abu Dhabi, said, “The Abu Dhabi Pearl is a stunning find, testimony to the ancient origins of our engagement with the sea. The discovery of the oldest pearl in the world in Abu Dhabi makes it clear that so much of our recent economic and cultural history has deep roots that stretch back to the dawn of prehistory. Marawah Island is one of our most valuable archaeological sites, and excavations continue in the hope of discovering even more evidence of how our ancestors lived, worked and thrived.” […] 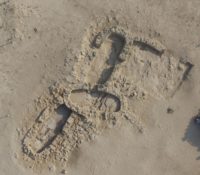 The Neolithic sites on the island of Marawah were first identified in 1992 during a survey carried out by the Abu Dhabi Islands Archaeological Survey, ADIAS. Subsequent excavations have shown them to include numerous collapsed stone structures, the earliest architecture yet discovered in the UAE. Aside from the priceless Abu Dhabi Pearl, significant finds from the key Marawah site have included an imported ceramic vase from the ‘Ubaid civilisation in Mesopotamia (Iraq), beautifully worked flint arrowheads and shell and stone beads. Numerous painted plaster vessel fragments were also discovered and represent the earliest known decorative art yet discovered in the UAE. At the beginning of 2020, a major new excavation will take place to uncover more of the settlement.

To be clear, it’s not the oldest pearl ever formed. There are fossils of pearls dating back to the Cretaceous (145-65 million years ago). It’s their interaction with humans that is comparatively young, and little wonder given how well-concealed they are. The Abu Dhabi is the oldest known pearl found in an archaeological context and therefore the earliest known evidence of pearling anywhere in the world. The previous record-holder for oldest archaeological pearl, unearthed at a Neolithic site in Umm Al Quwain (also in the UAE) was radiocarbon dated to ca. 5500 B.C. That pearl was even smaller — about 1.7 mm in diameter — and was found in a burial placed above the upper lip of the deceased. 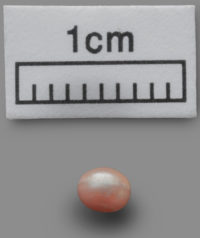 Diving for pearls was dangerous and difficult work, but pearls and mother-of-pearl objects have been found at multiple Neolithic sites on the Arabian Peninsula. The former had ritual and aesthetic value; the latter was necessary to make fish hooks to catch large fish. Archaeologists believe they were also important trade items, bartered, for example, with Mesopotamia in exchange for decorative ceramics like the one found at Marawah. Pearling remained a crucial element of the economy of Arabian Gulf communities for thousands of years. Abu Dhabi was a center of traditional pearl diving and trade well into the 20th century.

The pearl will be part of the 10,000 Years of Luxury exhibition, the first museum exhibition dedicated to the history of luxury in the Middle East. It runs from October 30th through February 18th, 2020.