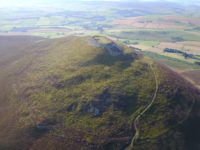 A hill fort in Aberdeenshire has been revealed to be the largest Pictish settlement in Scotland. The remains of ancient dwellings on Tap O’Noth, a hill in the village of Rhynie in northeastern Scotland, were radiocarbon dated to the 5th-6th centuries A.D. and the origins of the settlement may go back further to the 3rd century.

Excavations beginning in 2011 and recent drone surveys have pinpointed about 800 huts clustered on the hilltop around what the original fortified perimeter. That was expanded to cover the entire hilltop which was ringed by the Pictish fortification.

Professor Gordon Noble, who led the research, said: “This makes it bigger than anything we know from early medieval Britain.

“What was previously thought to be the biggest fort in early medieval Scotland is Burghead, at about five and a half hectares (13 acres).

“In England, famous post-Roman sites such as Cadbury Castle and Tintagel were around seven hectares (17 acres) and five hectares (12 acres) respectively.

“The Tap O’ Noth discovery shakes the narrative of this whole time period.

“If each of the huts we identified had four or five people living in them, then that means there was a population of upwards of 4,000 people living on the hill.

“That’s verging on urban in scale and in a Pictish context we have nothing else that compares to this.”

Not for another six centuries as least would settlements get this large.

The hill fort’s importance is reflected not just in the sheer numbers of huts and therefore residents, but also in the structures and objects found at the settlement. One of the huts is significantly larger than the others, an indication that the residents may have had an established social hierarchy. Artifacts unearthed at the site also indicate it was a high-status settlement. Large fragments of a 5th to mid-6th century Roman amphora imported from the Mediterranean area are of a type found at major royal centers like Tintagel in Cornwall, but the first ever found in eastern Britain and nothernmost ever found in the world.

There are other indications that Rhynie held a special position in Pictish society. In the valley at the base of the hill, archaeologists discovered glass drinking vessels from France, wine imported from the Mediterranean and extensive local production of metalwork. Eight Pictish symbol stones have also been found there, including the famous Rhynie Man, a slab six feet tall with the carved figure of a bearded man carrying a slim-handled axe over his shoulder. The stylized axe and the man’s head dress suggests he held a ceremonial role, represented a Celtic deity (the god Esus was often depicted with an axe) or perhaps a Pictish king.