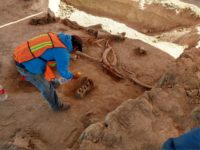 The remains of more than 60 Columbian mammoths have been unearthed in Xaltocan, Mexico. There are adult males and females as well as young specimens. They likely died after getting stuck in the mud of an ancient lake or the swampy terrain left in its wake once it dried up.

The mammoth bones were found 12 miles from Tultepec where in a global first, a mammoth hunting trap deliberately set by humans was discovered. There is no evidence of human hunting, although it’s possibly people took advantage of the opportunity to take down a giant while it was stuck in the mud. So far no evidence of butchering has been found on the bones either.

The bones of other Pleistocene animals, including bison and camel, were also found there. The hundreds of bones recovered from the site are currently being stabilized, analyzed and classified. When that work is done, we’ll have a more precise figure for the total number of mammoths and other megafauna. Researchers will also investigate their ages at time of death, diets and any injuries and diseases. 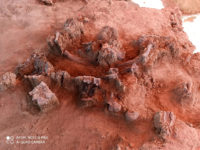 National Institute of Anthropology and History (INAH) archaeologists began surveying the former Santa Lucía Military Air Base, site of the future General Felipe Angeles International Airport, in October 2019 to salvage any archaeological and paleontological materials before construction. They opened 23 trenches on the land; osteological remains were found in three of them. In the pit closest to what was once the shore of Lake Xaltocan, the osteological remains are in much better condition that the ones found where the prehistoric lake was deepest.

Human remains were also discovered at the Xaltocan dig, but they were far more recent, dating to the pre-Hispanic period. About 15 individual burials were found. Some of them were interred with grave goods including pots, bowls and clay figurines. The ceramic types indicate the burials date to the Postclassic period (950-1521 A.D.).

These finds will not prevent the construction of the new airport, but there is a proposal under consideration to create a museum that would be integrated into the airport complex.