A cache of objects hidden by prisoners has been discovered under cellblock 17 of the Auschwitz main camp. Block 17 has been undergoing renovations since September in preparation for a new exhibition dedicated to Austrian citizens who were imprisoned and murdered at the extermination camp. The aim was to remove non-original construction elements added to the building in 1978 when the Austrian exhibition was first installed there, while preserving the national exhibition itself which was developed with the priceless contributions of Auschwitz survivors who are now no longer with us. In the process the work crew discovered unexpected original features which altered the renovation plans.

Come March and Poland’s implementation of stringent anti-coronavirus measures, renovations continued with a drastically reduced crew focusing solely on ensuring the structural safety of the building. They were shoring up the original masonry when they discovered a chimney flue. Underneath it were a wealth of objects hidden by prisoners: scissors, spoons, forks, knives, hooks, leather scraps, parts of shoes and cobbler’s tools.

The National Fund’s structural consultant, master builder Ing. Johannes Hofmeister, believes that it is no coincidence that a chimney was used as a hiding place in the very building where chimney sweeps were accommodated. It is likely that people with special manual skills were housed in the building. Survivor testimonies indicate that there were a number of workshops in the cellar where, for example, baskets were woven.

In the absence of an in-depth analysis by historians and conservators, it is still too early to discuss how they were used and the possible intentions of the prisoners – conceivable examples include making and repairing clothes, locksmithing or to prepare for an escape. It is also possible that the scissors and cutlery were used to barter with other prisoners.

The new exhibition is scheduled to open in 2021. The objects discovered under the flue are not expected to go on display when the Block 17 exhibition reopens. They have been transferred to the Auschwitz-Birkenau museum for conservation. 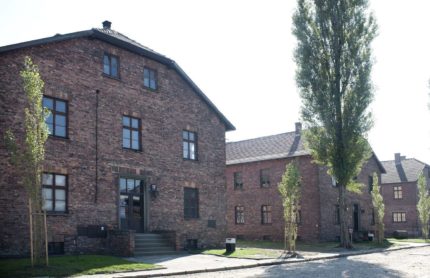