The Messel Pit in Hesse, Germany, was a quarry mined for coal and shale from the mid-1800s until 1971. Fossils were found there beginning in 1900, but the pit could not be scientifically explored until after mining ended. The fossils were preserved in the anoxic environment created when layers of decaying vegetation and mud were deposited on the bed of an ancient lake. Because of the unique conditions of the lake and the shale formation 47 million years ago, Messel Pit fossils are of exceptional diversity and so well-preserved that fur, feathers, scales, stomach contents, even multiple pairs of turtles frozen in the act of mating have been unearthed there. It is one of the richest fossil repositories, the richest source of early mammal fossils and the greatest source of information about the Eocene epoch in the world.

Quarrying left a crater 200 feet deep that some people thought would make an awesome landfill. After much protest at this ruinous plan, in 1991 the government of Hesse bought the pit and made it a protected cultural monument.  It was declared a UNESCO World Heritage Site in 1995 and is now operated by the Senckenberg Society for Nature Research.

Among the rare fossils that have been found in unusual number are complete snake skeletons from four species. Two of them are small, around 20 inches long, but one of them, Palaeopython fischeri, could reach lengths of more than six feet. Named after Joschka Fisher, Hesse’s Minister of the Environment in the 80s and 90s who was instrumental in the conservation of the Messel Pit, the snake was classified as a member of the Palaeopython genus, but a new study has found it is actually an Eoconstrictor, a relative of modern boa constrictors.

A detailed analysis of the neurological pathways of Eoconstrictor fischeri revealed another surprise. The neurological pathways of the Messel snake are comparable to those of the recent large boas and pythons – snakes that possess so-called “pit organs.” These organs are located between the scales of the upper and lower jaws and allow the snakes to generate a three-dimensional heat image of their surroundings by combining visible light and infrared radiation. This enables the reptiles to more easily detect prey animals, enemies, or hiding places.

“However, in Eoconstrictor fischeri these organs were only present on the upper jaw. Moreover, to our surprise there is no evidence that this snake preferred warm-blooded prey. Until now, we could only confirm cold-blooded prey animals such as crocodiles and lizards in its stomach and intestinal contents,” adds [paleoherpetologist Dr. Krister] Smith [of the Senckenberg Research Institute and Natural History Museum].

The team of scientists therefore assumes that the earliest pit organs served to generally refine the snakes’ sensory perception and – other than in modern constrictor snakes – were not primarily used for hunting or defense purposes.

The study has been published in the journal Diversity and can be read in full here. If you’ve never seen a fossil of a complete snake skeleton before, you’re in for a treat. Look at this badass: 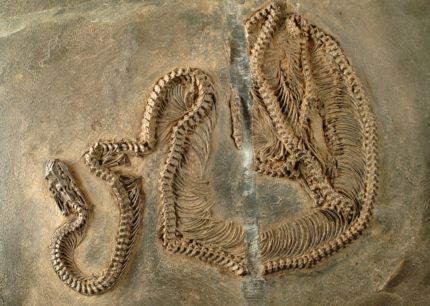