Archaeologists have discovered a pair of gilt-bronze shoes in a Silla tomb in Hwangnam-dong, Gyeongju, North Gyeongsang Province. This type of shoe dates to the late 5th-6th centuries and is extremely rare. Only 21 pairs of Silla gold shoes have been found before, and the last time a pair was discovered was in 1977. That tomb was also in the Gyeongju area which was the capital of the Silla Kingdom.

The metal of the shoes has t-shaped cutouts on the surface and round gilt-copper decoration. These were not made for taking a stroll around town. They were used for funerary rituals as the elegant shoes the deceased would be wearing when they transitioned to the afterlife.

The gilded shoes were found during the excavation of tomb No. 120, a number assigned to the archaeological site during the period of Japanese rule (1910-1945), but it was not investigated at the time and construction of private homes damaged the remains of the tomb. In May of 2018, Cultural Heritage Administration and city archaeologists began an excavation to determine how much was left of No. 120.

The dig unearthed another two tombs to the north and south, dubbed No. 120-1 and 120-2.  The gilt shoes were in 120-2. Archaeologists also found other valuable artifacts in 120-1 and 120-2: a silver belt decoration, horse harness fittings, a saddle, bronze, earthenware and iron pottery. The silver belt ornament was discovered on the side of the deceased’s leg.

The excavation is still in the early stages. Archaeologists plan to complete the investigation of 120-1 and 120-2 before turning their attention to No. 120. As the original mound of 120 is twice the size of the off-shoots, if there are any artifacts and remains inside, they probably belonged to someone of higher rank. 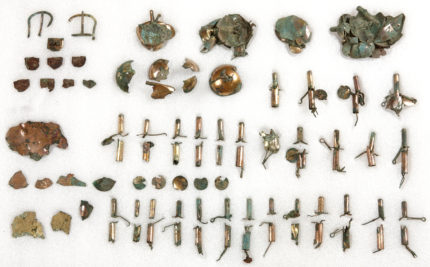