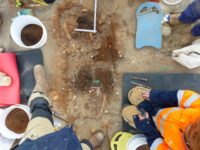 Archaeologists have discovered the early Iron Age burial of a richly adorned woman in the town of Saint-Vulbas, eastern France. The older woman was found on her back, arms beside the body, an intact pot to the right of her head. She wore bracelets on each wrist made of alternating glue and green glass beads and copper alloy disks. The belt around her waist, probably made of leather, was covered in hemispherical copper alloy studs and closed with a copper alloy buckle. 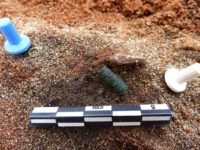 While the tomb had collapsed over the centuries, it was possible to reconstruct its original shape: a rectangular pit containing the body of the deceased in a wooden coffin wedged into place by five smooth stones. The coffin had long-since decomposed, but its imprint remains on the soil. Fragments of the wood preserved under the body indicate that the coffin was made of oak. 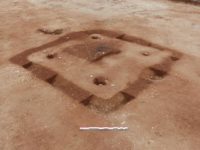 The excavation of 2.5 acres slates to become an industrial park revealed a vast Iron Age burial ground. Three circular enclosures dating to the first half 8th century B.C. are believed to have been mounds originally. A cremation burial was found in the center of one of them. Near one of the enclosures, a funerary monument was built in the late 5th century B.C. It was a roofed structure on four posts features surrounded by a square enclosure.

In the middle of the enclosure is a pit with two separate deposits of cremated remains. A box of rigid organic material, likely wood, contained a selection of bones, washed after the cremation, and copper alloy filiform bracelets. The box was lined with limestone slabs. The second deposit contains bones, fragments of copper bracelets and an iron belt clip placed inside a flexible  container, probably a basket. The adornments suggest the deceased was a woman.