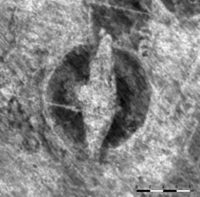 In October 2018, a geophysical survey of a field in Halden, southeastern Norway, revealed the presence of Viking ship burial. The landowner had applied for a soil drainage permit and because the field is adjacent to the monumental Jell Mound, archaeologists from the Norwegian Institute for Cultural Heritage Research (NIKU) inspected the site first. Using a four-wheeler with a georadar mounted to the front of it. The high-resolution ground-penetrating radar picked up the clear outline of a ship 20 meters (65 feet) long.

The ship was found just 50 cm (1.6 feet) under the surface. It was once covered by a burial mound like its neighbor, but centuries of agricultural work ploughed it away. Subsequent investigation of the area found the outlines of at least 11 other burial mounds around the ship, all of them long-since ploughed out as well. The georadar also discovered the remains of five longhouses.

In order to get some idea of the ship’s age, condition and how much of it is left, in September of 2019, NIKU archaeologists dug a test pit was dug to obtain a sample of the wood of the keel. The keel was of a different type to ones from other Viking ship burials known in Norway. It is thinner and smaller than usual. The two-week investigation and analysis of the sample found that the ship does indeed date to the early Viking era. The wood was felled between the late 8th century and the start of the 10th century.

In more distressing news, the analysis of the sample revealed that the wooden remains were under severe attack from fungus. The use of fertilizer on the farmland above the ship encourages the fungal growth and not only is the keel plagued by soft rot, the remains even at the deepest point where preservation conditions are the best possible are under acute distress.

Norway’s government has responded to the archaeological emergency by allocating 15.6m kroner (about $1.5 million) to excavate the Gjellestad Viking Ship and get it out of the ground before it rots to nothingness. While other Viking ship burials have been excavated in recent years, the last Viking ship burial mound to be excavated was the Oseberg ship in 1904-1905. If the Norwegian parliament approves the budget, excavation of the Gjellestad Ship is slated to begin in June.

[Jan Bill, curator of the Viking Ship Collection at the Museum of Cultural History,] said that even if the vessel was less well preserved that the team hoped, it could still provide important new information on Viking ship burials, as the Tune, Gokstad, and Oseberg ships, which were excavated in 1868, 1880 and 1904, respectively, were not carried out to modern standards.

“It’s important because it’s more than 100 years ago that we excavated a ship burial like this,” he said. “With the technology we have now and the equipment we have today, this gives us a tremendous opportunity to understand why these ship burials took place.”

“These were very early excavations so there’s a lot of information that we really don’t have because of the way it was done at the time.”

He said that as well as the keel of the boat, there were also signs of burial goods and other matter inside the ship.

“We know that when we excavate we will be able to investigate some of those objects,” he said.