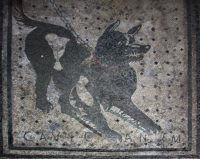 In 2013, the British Museum staged an exhibition dedicated to the daily lives of the people of Pompeii and Herculaneum and how they were snuffed out by the eruption of Vesuvius. Life and Death in Pompeii and Herculaneum was a blockbuster, selling more than 50,000 advance tickets and drawing crowds of visitors flocking to see the more 250 artifacts from the British Museum’s collection and on loan from the Archaeological Superintendency of Naples and Pompeii. The show feature some iconic pieces — the fresco portrait of baker Terentius Neo and his wife, the “CAVE CANEM” mosaic of a guard dog from the House of Orpheus, the sculpture of Pan having sex with a goat, the plaster cast of a dog writhing in its final agony — as well as lesser known but no less remarkable survivors, like a carbonized cradle, a loaf of bread, a life-sized bronze hare mould used to make cakes or terrines.

A private tour of the show was broadcast in movie theaters at the time. The hour-and-a-half film walks viewers through the exhibition guided by curators and experts including Mary Beard and Giorgio Locatelli. It covers the history of the towns’ destruction, the last two days of their ancient existence

Seven years later, the British Museum has uploaded the complete film to its YouTube channel. It’s one hour and 27 minutes long and even so not nearly long enough for me. They should have made it a mini-series. Pompeii Live is free to view, of course, but like so many of its brethren, the museum has been hard-hit by the extended closure, so if you’d like to help support it, donate here.