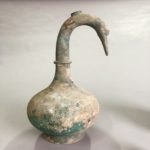 A 2,000-year-old bronze pot in the shape of a swan filled with more than three liters of an unknown liquid has been unearthed in the city of Sanmenxia, in central China’s Henan Province. It was discovered in a tomb found during an archaeological survey at the site of an urban renewal project. It is the first bronze swan-necked pot ever found in Sanmenxia.

The design of the tomb indicates it dates to the turnover period between the late Qin Dynasty (221-207 B.C.) and the early Han Dynasty (202 BC-AD 220). Other artifacts found in the tomb include an iron sword, a bronze kettle and ladle and jade objects. These are fine pieces, but not the kind of rich furnishing you’d find in an aristocratic tomb. The deceased was likely a titled official but of comparatively low rank.

Most of the bronze vessels from this period were pot-bellied designs, wide in the middle with stovepipe necks. Animal forms are rare in pottery, more commonly seen in lamps like the goose lamp discovered in 2018 in a Western Han Dynasty tomb found in Luoyang, a Henan Province city 90 miles east of Sanmenxia. This one is definitely not a goose. 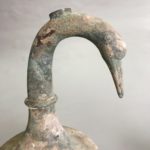 The archaeologists invited a senior veterinarian to help identify the shape as of a swan.

“The design resembles that of a mute swan,” said Gao Ruyi, a senior veterinarian with the Sanmenxia wetland park, adding that the beak of a swan is longer than that of a goose, which has been degenerated as a result of being fed by human beings.

Archaeologists speculated that the ancient craftsmen may have observed swans closely to create the pot in such a realistic shape.

“We can boldly estimate that swans may have appeared in Sanmenxia during the late Qin and early Han dynasties,” said Zhu.

The tomb found in Luoyang also contained a bronze vessel (the more typical pot-bellied kind) full of liquid. The pale yellow fluid was at first thought to be rice or sorghum wine which were known to have been used in Han funerary rites, but was later discovered to be a much rarer beverage: an “elixir of life” made of toxic minerals.

Archaeologists aren’t speculating on what the liquid in the swan’s belly might be. It is murkier and darker than the elixir, a muddy yellowish brown with precipitates at the bottom. It does not smell like alcohol; it reportedly smells like earth. A sample has been sent to a laboratory in Beijing for analysis.