A rare group of Roman Iron Age game pieces and an elongated die have been discovered in a burial cairn at Ytre Fosse in Western Norway. University Museum of Bergen archaeologists excavated the site overlooking the Alverstraumen strait, an area known for its copious burial mounds, in advance of development and uncovered an Early Iron Age grave.

Underneath a top layer of turf removed by a mechanical digger, the team discovered a circle of stones around black soil indicating burning in situ. The burn layer contained bone fragments and charcoal from a cremation pyre. Artifacts were added to the grave after the fire had consumed the body: three ceramic pots, a bronze pin, burned glass, 18 game pieces and one long rectangular die, also known as an oblong or stick die.

The gaming pieces are made of bone and in relatively good condition with 13 intact and only five broken. The die, also made of bone, was broken in two pieces. On three of its long sides the numbers are in the form of circles with a dot in the middle representing rolls of three, four and six. One side is blank for a roll of nada. These types of dice are exceedingly rare in Norway. Fewer than 15 of them are known.

The dice is of a very rare type, exclusive for Roman Iron Age (AD 1 – 400). In Scandinavia, similar dices are found in the famous Vimose weapon-offering site at Fyn, Denmark. At Vimose also the gaming board was preserved, giving a unique view into Early Iron Age board games among the Germanic tribes in Scandinavia. Board games, inspired by the Roman game Ludus latrunculorum, seems to have been played amongst the elite in Roman Iron Age Scandinavia. These games are also the forerunner to the more famous Viking Age (AD 750-1050) board game Hnefatafl.

The results from the Ytre Fosse excavation will undoubtedly contribute with more precise data on the chronology of dices and gaming pieces in Early Iron Age Norway and the significance and social impact of gaming  during these times. 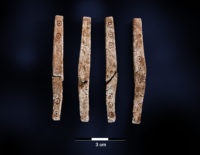 The high-status game gear is evidence that the deceased was someone of significant power and wealth in the area. The Alverstraumen strait was an important trade route transporting goods to and from the continent. Anyone who controlled the shipping lane raked in money from taxes, duties and fees and had access to luxury items like this Roman gaming set.

The objects and remains have been recovered from the grave and will be stabilized and studied at a conservation lab in Bergen. There are no current plans for the game pieces to go on display, but that is the ultimate goal.