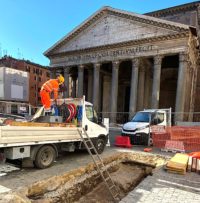 A sinkhole that opened up in the piazza in front of the Pantheon has revealed seven pavers from the second century A.D. The travertine slabs are about 30 x 35 inches wide and one foot thick and located seven feet under the current street level. They are intact, in good condition and in their original alignment, preserved from centuries of city build-up by a layer of fine pozzolana, volcanic ash that the Romans used to make their famously indestructible cement that could set under water.

Hadrian built the Pantheon we know today around 125 A.D. on the site of an earlier Pantheon that had burned down in 80 A.D. It was rebuilt by Domitian and that one burned down too in 110 A.D. Because that first temple was built by Marcus Agrippa in honor of his and Augustus’ victory at the Battle of Actium (31 B.C.), Hadrian had the distinctly unimperial modesty to inscribe the new and improved version to the originator: M[arcus] Agrippa L[ucii] f[ilius] co[n]s[ul] tertium fecit,” meaning “Marcus Agrippa, son of Lucius, made [this] when consul for the third time.” It’s likely construction began under Trajan (r. 98-117 A.D.). The design that features what is still to this day the largest unreinforced concrete dome in the world bears the hallmarks of Trajan’s genius architect Apollodorus of Damascus and some of the bricks used in the construction are emblazoned with stamps from Trajan’s time. Hadrian finished the job. We think the current Pantheon was dedicated in 126 A.D., but we don’t know for sure because Hadrian gave all the props to Agrippa.

As part of the reconstruction of the Pantheon, the square in front of it was also raised and enlarged. The travertine pavers, some of which had been rediscovered earlier before during utilities work in the 1990s, were installed at that time. Researchers were able to extrapolate the size of the piazza at the time of its reconstruction by Hadrian. It was much larger than it is today.

The trench where the pavers were found will now be handed over to the water utility for repairs and then the  archaeological investigation will continue. Earlier this week the Soprintendenza Speciale Roma, which oversees the cultural heritage of the Eternal City, resumed restoration activities on a limited basis. Next week they will expand to additional sites.

It’s nice to see a glimmer of normalcy on the horizon. This is what the Pantheon and Piazza della Rotonda looked like 10 days ago from a drone’s eye view.

Such a detailed 3D render of Rome