Curators at the Vindolanda Museum have discovered a Roman leather mouse in a bag full of scraps and off cuts. The flat piece of leather cut in the shape of a mouse dates to the early 2nd century. It is an angular, geometric outline and rather fat-tailed, reminiscent more of an Escher lizard than a mouse at first glance, but upon closer inspection there are dashes indicating hairs on the body and down the tail.

There are more than 7,000 leather objects in the museum’s collection, preserved in the anaerobic soil of the ancient fort site. Some of the Roman leather pieces now on display at the Vindolanda Museum are tents panels, patches, bags and enough shoes to make Imelda Marcos blush. Excavations have also unearthed many leather scraps which are in storage, not notable enough on their own to warrant going on display. Curators discovered the mouse in a box of leather offcuts and scraps that had been found in the period IV/V residence of the  commanding officer in 1993. That dates the mouse to around 105-130 A.D. 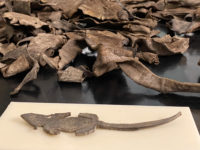 The Trust’s Curator, Barbara Birley said “One of the most wonderful things about the Vindolanda collection is that we never know what we are going to find next. Even though we have had to delay the start of our 2020 excavations this year we see the collection still has hidden treasures to be revealed. Although we have a significant amount of evidence of children at Vindolanda we have very few toys, it would be wonderful if this little mouse had been a toy and a source of entertainment for a child here on the northern frontier”.

Real mice were indeed everywhere in ancient Vindolanda, in every fort, likely to be present in all houses and spaces and would have been a consistent pest and companion to the people who lived there. When the Vindolanda granaries were excavated in 2008, the bones from thousands of dead mice were uncovered below the floors of the building, where they had been living and feasting on the ears of grain that dropped between the flagstones. It is quite wonderful that someone 2,000 years ago crafted this toy mouse from leather, in the knowledge that their creation would not have sharp teeth nor eat them out of house and home.

The museum will study and conserve the newly-discovered rodent and will then put it on display in the leather case. 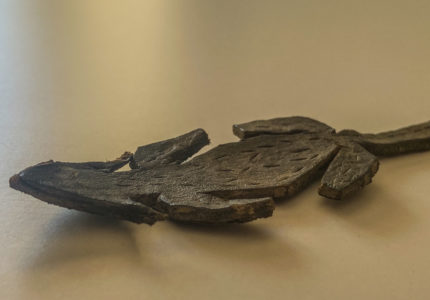