The decapitated bodies discovered in a late 3rd century Roman burial grounds in Somersham, Cambridgeshire, were likely victims of Roman military executions. The remains were first discovered more than a decade ago during excavations of the Knobb’s Farm Quarry site, but thorough analysis of the findings has just been published now.

In three small cemeteries, archaeologists unearthed 52 burials, 17 of which were decapitated bodies buried with their heads at their feet or between their legs. By percentage, this is much higher than the average number of decapitation burials in Roman Britain — 33% versus up to 6%. In addition to the decapitated inhumations, 13 prone burials, which are even more statistically rare (2-3%), were found. Six burials were both decapitations and prone.

The Knobb’s Farm site was part of a large Roman farm settlement, which sadly has been most lost thanks to gravel quarrying activity in the 1960s. The cemeteries were located at the southwestern edge of the settlement. The farm was active from the 1st century A.D., and it expanded in the 2nd century to include extensive grain processing facilities. The buildings were dismantled and the site was abandoned in the late 3rd or early 4th century.

Osteological examination of the bones suggest the deceased worked at the form. There was significant skeletal trauma (breaks, fractures, dislocations) unrelated to decapitation. There are other pathologies evident in the teeth and bones that indicate childhood malnutrition and chronic illness, plus cavities, abscesses and tooth loss. Osteoarthritic changes and other signs of repetitive stress suggest the deceased worked hard in life.

“DNA shows there were nine different types of groups that had come from various places,” Isabel Lisboa, archaeological consultant on the project, told CNN on Monday.

“These settlements were extensive rural settlements that provided grain and meat to the Roman army.”

It’s not clear why so many were decapitated, but Lisboa said the most likely explanation is executions for crimes, with another possibility being ritual practice.

During the later part of the Roman occupation of Britain, the number of crimes carrying the death penalty increased from 14 to 60, as state instability became more prominent, according to research cited by the study.

“Roman laws seem to have been applied particularly harshly at Knobb’s Farm because it was associated with supplying the Roman army, so there were many decapitations,” said Lisboa, who is a director at Archaeologica, an archaeological consulting company.

“Crimes normally would have been let go, but there were probably tensions with the Roman army.”

Somersham is only 40 miles northwest of Great Whelnetham where another Roman-era cemetery was discovered in 2019 that also had an unusually high proportion (40%) of decapitated individuals. It was very high in prone burials too, bringing the overall total of deviant burials in that one cemetery to 60%. An unknown religious practice was proposed as an explanation for those decapitations and burials as the incision marks on the neck were made neatly under the jaw after death.

The sandy, highly acidic soil of the area left the Knobb’s Farm bones in very poor condition. Only four of the decapitated bodies were sufficiently preserved complete with at least some cervical vertebrae to attest to how and when the heads were removed. Only one had actual surviving cut marks. Even so, the evidence of the four makes it clear that these individuals were killed by a violent blow from behind severing their necks. The angles indicate the victims were kneeling. There are no defensive wounds, no evidence whatsoever of battle or a raid or any other type of conflict. For whatever reason, they were given the chop. 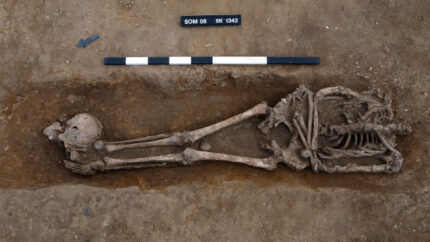 The study has been published in the journal Britannia and can be read in its entirety here.