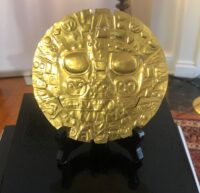 The Smithsonian has agreed to repatriate a pre-Inca gold disc to Peru 119 years after its aquistion. The National Museum of the American Indian signed a memorandum of understanding with the Peruvian government for the return of the Echenique Disc, a gold disc whose design is the official symbol and shield of the city of Cusco. It was officially transferred to the Peruvian ambassador to the United States at his residence in Washington, D.C., on June 15th.

The object is a thin sheet of hammered gold about five inches in diameter. The alloy is relatively pure, composed of 90% gold, 5% silver and 5% copper, so just shy of 22 karats in modern classification. In the center is a fanged feline face with large rounded eyes and a snout-like nose, a design seen frequently in ancient Peruvian ornaments and pottery. It had a supernatural connotation — perhaps representing a deity — and indicated the high status of its owner. There are holes and slits cut into the sheet and it is believed to have been worn as a pectoral ornament. 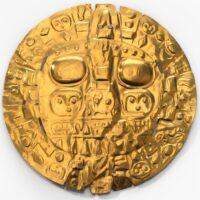 The outer border is divided evenly into 20 sections that contain a variety of imagery including anthropomorphic figures, geometric shapes, crescent moons and other symbols. Their meaning has not been deciphered but may indicate the disc was a solar or lunar calendar. It is more than 2,000 years old, the most recent scholarship placing it between 800 B.C. and 1 A.D., and is a masterful example of ancient Andean goldsmithing.

As with so many cultural heritage artifacts that wound up far from their origins, the disc’s history is mysterious. It first emerged on the record in 1853 when it was given as a ceremonial gift along with several other ancient objects to then-Peruvian president José Rufino Echenique during an official visit to Cusco. Where it came from, who gave it to him, anything at all about its past before that point is unknown.

Things get murky again after that as the disc and other objects gifted to Echenique just sort of disappeared for a while. Julio Tello Rojas, father of Peruvian archaeology, tried to track them down in the 1920s and failed. He believed they had been sent to Chile and were destroyed in a fire in Santiago. He was wrong, at least in part, because in 1912 it was sold privately by Dr. Edward Gaffron, a German doctor who lived in Peru for decades and built an enormous collection of ancient Peruvian artifacts, to collector George Heye, founder of the Museum of the American Indian in New York which was later incorporated into the Smithsonian as the National Museum of the American Indian.

The Smithsonian’s provenance for the disc records that in fact it was inherited by one of Echenique’s daughters who then sold it to Gaffron, and there are at least two other artifacts in museums that are believed to have been part of the Echenique group. One is a gold ornamental plume or pin incised on both sides with a similar supernatural feline figure, now in the Metropolitan Museum of Art. They don’t know its provenance either. Big blank before 1850 and between then and its acquisition from a German private collection in 1942. Interesting German connection there; maybe Dr. Gaffron got his hands on more of the Echenique treasure than the one disc we know about.

The choice of the disc as the official shield of Cusco was a pointed one. In 1986, the city council passed a law prohibiting the use of any post-Conquest Spanish colonialist imagery in Cusco’s coat of arms. Today replicas of it

adorns the streets, fountains and buildings of Cusco’s historic center. The original is expected to be returned to Cusco for permanent display, and Cusco’s mayor Victor Boluarte is hoping to coordinate with Peru’s Culture Ministry for its return by June 24th, the day of the Inti Raymi celebration, the Festival of the Sun, an ancient Inca ritual which is the culmination of the Jubilee month celebrating the heritage of the imperial city.