One of the masterpieces of Etruscan sculpture has been given a high-tech laser cleaning. The larger-than-life male head is believed to have been part of a cult statue of the god Aplu (Apollo) that once stood in a temple in Volterra. It dates to around 480 B.C., and while it was made locally, the sculpture was done in archaic Greek style with the characteristic placid smile, almond-shaped eyes and prominent cheekbones. The domed forehead, the strong brows carved in relief and the elaborate hairstyle are typical of Etruscan figural sculpture. The eyes would originally have been filled with glass or stone, a technique derived from bronze sculpture used here in marble. 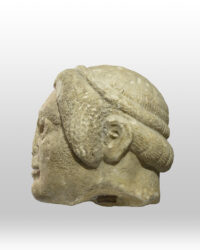 It is the earliest sculpture carved out of prized Carrara marble ever found in the Etruscan territory of central Italy. Very few late-archaic Etruscan (late 6th, early 5th century B.C.) marble sculptures have survived. Its local production incorporating Greek traditions, size and temple origin make the Lorenzini Head one of the most important sculptures in the Etruscan archaeological record and without question the most important statuary ever to emerge from Volterra. It has been included in every text on Etruscan art and was described by archaeologist and Etruscan expert Ranuccio Bianchi Bandinelli as “the most Greek of the Etruscan works.”

The statue was famous even in its own time. As the primary cult state of Volterra’s Temple of Apollo, it was widely reproduced in miniature and bronze figurines of the statue were widespread throughout the Volterran sphere of influence. Archaeologists believed they were used for devotional purposes in private homes. 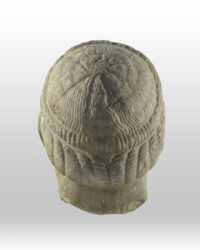 According to Lorenzini family lore, it was discovered in a well in the courtyard of their old home in downtown Volterra, where tradition holds there was once an Etruscan temple. There was an extensive legal battle over who held legitimate title, the Lorenzini who owned the property or the artisan Maurizio Pazzagli whose grandparents had owned the well where it was found. The Lorenzini won, and in 1946 Lorenzo Lorenzini made a handshake agreement with the director of the Guarnacci Etruscan Museum to loan the head for display 364 days a year. On Christmas the head got to spend the day with family in their palazzo.

A second legal battle, this time with the state, was ignited in 1997 when Lorenzo’s heirs decided to sell the head. Italy wanted to keep it from leaving Volterra (the sellers stipulated as a condition of sale that it could not leave Italy, but it could end up anywhere in the country) and the court of Pisa ordered it sequestered in 1998. The situation was finally resolved only in 2019 when the Italian Culture Ministry exercised its right of pre-emption (ie, first refusal) and bought the Lorenzini Head for 355,000 euro.

They assigned it to the National Archaeological Museum of Florence, a decision which incensed the  Volterrans — neither its previous custodians at the Guarnacci Museum nor anyone else in the head’s hometown was even consulted — and caused the Mayor of Volterra to protest that “the sack of Volterra continues, albeit in a creeping way,” a pointed reference to the 1472 sack of the city by the Florentine troops of Lorenzo the Magnificent who wanted full control of the alum mines recently found in the area.

Cries of outrage notwithstanding, the Lorenzini Head is now in the care of the National Archaeological Museum. Restorer Daniela Manna deployed a laser with a pulse specifically optimized for cleaning objects of cultural heritage.

Thanks to the cleaning and restoration of the work, preceded by a series of diagnostic analyzes carried out by specialists from the Institute of Cultural Heritage Sciences of the CNR in Florence, Daniela Manna was able to free, thanks to the use of the Eos 1000 laser LQS, the surfaces of the face and the splendid and highly detailed hair from the limestone incrustations that prevented the appreciation of the precise volume of the head and the quality of the marble.

The red haze that characterized the face was also eliminated, since it was actually modern paints and not an ancient pigment, which had been interpreted as an intentional coloring given for ritual or cultic reasons.

So cleaned up and free from colors and harshness that did not belong to it, the Lorenzini Head can today for the first time be fully appreciated and evaluated in its full and smooth forms, in its intentional asymmetries, certainly due to the evaluation of the point of view from which cult statue had to be observed in the mystical and evocative atmosphere of the temple that housed it in some sacred area of ​​ancient Velathri (Volterra).

The laser has been donated to the museum which plans to use it to clean the surfaces of marble, alabaster, stone and pottery artifacts in the collection, including Etruscan urns richly decorated with mythological scenes. The laser is so minutely programmable that it is the ultimate in non-invasive technologies, minimizing the use of harsher solvents and cleansers.