Archaeologists have discovered the oldest known shoe ever found in northern Germany, and maybe even the whole of Germany. The leather shoe was found next to a late Iron Age wooden plank path which dates to around 50 B.C., so the shoe is around 2,000 years old. It is a kind of sandal with the leather gathered in the front and pierced, a leather thong is threaded through holes to close the shoe. 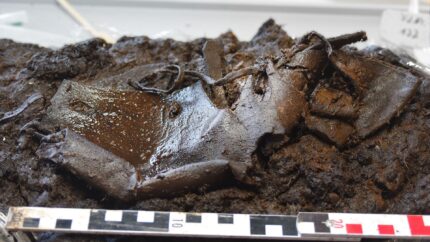 The wood plank path dubbed PR VI is remarkably well-preserved and runs almost 2.5 miles through the middle of Brägeler Moor between Diepholz and Lohne. Plank paths were necessary infrastructure for humans to travel somewhat safely over the marshy moorlands. They required a great deal of wood to be transported to the site and the route through the moor had to be cleared and prepared for construction.

More than 500 ancient plank paths are known to survive in Lower Saxony, but PR VI is exceptional. It is one of the longest bog trails not just in Germany but in the world. The existence of PR VI has been known for a century as sections of it were encountered in peat extraction. Until recently there was no funding to excavate it and document it archaeologically. Excavations finally began in June of 2019 and are expected to continue through 2022.

“The moors of Lower Saxony hold the testimony of many thousands of years of history. They are a unique archive, as they have not only preserved processed shards and metal objects as decisive evidence of our history, but also organic finds, “says Lower Saxony’s Minister for Science and Culture, Björn Thümler, happily. “The best known are the bog corpses, but also wooden idols, long wooden paths and numerous other remnants of life at that time are part of it. A shoe that is lost and found again after 2,000 years, the oldest shoe from Lower Saxony to date, is an immensely personal testimony to a previous life. You can hardly get any more poetic to the people of that time. It is one of those testimonies that make time tangible as if under a magnifying glass.

In the immediate vicinity of the shoe there were remains of a broken carriage axle and other car fragments. You can almost grasp the incident in which the wearer lost the shoe: The axle of a wooden cart, probably pulled by cattle, broke in two and the cart had an accident on the bumpy road. While doing this or trying to recover the car parts, the owner of the shoe fell or stepped beside the path and the shoe got stuck in the sticky mud – where it was found now, over 2,000 years later.

The moor is now part of the Dümmer Nature Park which is dedicated to the conservation of the ecosystem and history of this remarkable landscape while making it more accessible to visitors. Part of the conservation program is rewetting moorland that has been exposed from peat mining, and a large 520-meter (.3 mile) section of PR VI will have to be removed before peat extraction and rewetting of the area.

The ancient plank path will be a featured element in the nature park’s improved trail system. It will be made “walkable” by a footbridge linked to a moor trail that parallels the original route. Visitors will be able to traverse the moorland the way ancient travelers did, only their shoes will stay on their feet.