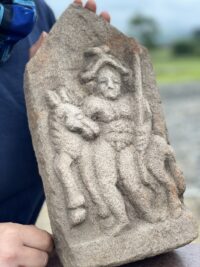 A sandstone relief of a man holding a spear standing in front of a donkey or horse has been unearthed at the Roman fort of Vindolanda in Northumberland. The stone is intact, a rectangle with a peaked top that measures 160mm wide by 315mm high (6.3×12.4 inches). It was discovered embedded face up in the floor of a 4th century building. This was a reuse. The relief would originally have been placed in a fitted niche.

Site archaeologist Marta Alberti, one of the team overseeing the excavations at Vindolanda, is now piecing together all the clues to try and establish who the carving may represent, and with no comparable discoveries at Vindolanda and no inscription on the relief those clues are in finer details of the carving. Marta commented “The nakedness of the man means he is probably a god, rather than a mere cavalryman, he is also carrying a spear in his right arm, a common attribute of the god of War – Mars, however when you look at his head, the two almost circular features could be identified as wings: a common attribute of Mercury – god of travel. Horses and donkeys are also often associated with Mercury as a protector of travellers”.

Another clue is not in the find itself but where it was found. The stone floor was very close to that of a large 4th century cavalry barrack. The units residing in the part of the fort may have had their own interpretation of Mars, or Mercury, or a third and so far unidentified version of the god merging the qualities of both. Marta commented “this interesting relief may represent something we have not only never seen before but something we may never see again”. 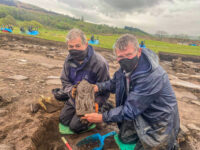 The volunteer excavations, a popular yearly feature of the Vindolanda site, had to be deferred in 2020. The finders of the relief, Richie Milor and David Goldwater of Newcastle, have been dedicated Vindolanda volunteer excavators for more than 15 years, making a yearly pilgrimage to join in the dig. The resumption of excavations in March 2021 marked their triumphant return to keep their long streak going, and Vindolanda celebrated by giving them a unique artifact to find.

David noted that “I saw one of the legs of the horse first and then the pointed top of the relief “, Richie said “we are just absolutely elated, very proud to be part of this discovery, it was actually very emotional. Whether you find something or not we love coming to this site, playing our small part in the research that takes place, but finding this made it a very special day indeed.”

The Roman Fort and Roman Army Museum at Vindolanda just reopened June 15th after having been closed since lockdowns began in March 2020. A selection of current finds, including the equestrian relief, going on display at the museum on July 1st.