A Roman seal ring with a gemstone carved with a dynamic image of Achilles supporting Amazon queen Penthesilea after he killed her has been discovered at the archaeological site of Tossal de Baltarga in the Catalan Pyrenees. The ring is made of a single wide hoop of iron with the oval intaglio gemstone set in a beveled border. From comparison to similar types found at other sites, the ring dates to around 100-50 B.C.

Achilles, in full armor wielding sword and shield, is depicted supporting a dying Penthesilea, his helmet crest waving as he turns. He has fatally wounded her. The Amazon queen is on her knees with her head bowed, leaning on her labrys. Achilles attempts to hold her up below her left arm. Their clothing is finely detailed, his double-row pteruges (the skirt of leather or stiffened linen flaps worn under Roman and Greek cuirasses) and shoulder strips are individually outlined. Penthesilea’s chiton is meticulously rendered with pointed tails on the short skirt and diagonal folds wrapping her thighs leaving her legs free. You can even see the lines of her sandals on her right foot. Her hair is in a tight bun at the nape of her neck. All of this carved into a stone just 17 x 15.5 mm (.7 x .6 inches).

The motif of Achilles supporting the woman he has slain as she draws her last breaths is frequently seen in Greco-Roman decorative arts, drawn from the Homeric tradition that that Achilles dealt the mortal blow, removed her helmet and then fell instantly in love with her. The 2nd century geographer Pausanias notes in his Description of Greece that the throne of the monumental sculpture of Zeus in his temple at Olympia had a relief of “Penthesileia giving up the ghost and Achilles supporting her.” A marble relief of the same scene from the Sanctuary of Aphrodite Aphrodisias survives.

The quality of the intaglio is so high it cannot have been made by local Iberian craftsman. It was so high, in fact, that such a ring is unlikely to have been worn by an Iberian, not even a member of the local elite. This was a luxury import of a type not found in Iberia before the Roman occupation, and there is no evidence of trade or economic activity at the site that would explain its presence there; a Roman must have brought it to Tossal de Baltarga, likely a Roman officer.

Iron seal rings have been found before at Late Republican army and battle sites in Iberia. They were expensive items, but made out of durable iron rather than more ornamental precious metals, and they served practical uses as well. They were used to sign documents, both personal and official, which links the rings to the administration of governmental and military functions, and they were also a kind of dog tag, a means of identifying a Roman officer fallen in battle. 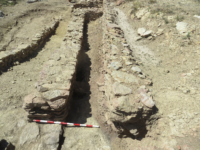 Three iron seal rings have been found in the Republican Roman layers of Tossal de Baltarga, which was occupied in three phases from the Bronze Age until its abandonment in the 1st century B.C. The iron ring with Achilles and Penthesilea intaglio was unearthed in 2017 in Building F which was built in the middle of the 2nd century B.C. and abandoned between 50 and 30 B.C. The rings, the concentration of coinage and hobnails from caligae found at the site indicate it housed a small military garrison centered around a watchtower that would have been of strategic significance to control the nearby Pyrenean pass during the wars of the declining days of the Republic, including Caesar’s conquest of Gaul (58-50 B.C.) and the rebellion of Quintus Sertorius (80–72 B.C.).

We [the researchers] therefore suggest that the loss of the seal-rings is linked to the abandonment of Tossal de Baltarga, caused by the military campaigns in the territory of the Cerretanii during the mid- or later first century B.C. Although no evidence of violent destruction at the settlement has been encountered so far, its key role as a major outpost in the area could suggest that the garrison was rapidly withdrawn. In this scenario, the seal-rings could have been lost or left behind, and the settlement abandoned as part of a major reconfiguration of the territory after the suppression of the last uprising of the Cerretanii in 39 B.C.

The study has been published in the European Journal of Archeology but is alas paywalled.