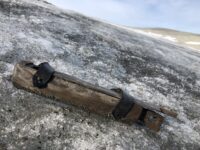 A box discovered on the Lendbreen ice patch in Norway’s Breheimen National Park has been opened to reveal a surprise: the remains of a beeswax candle. When the wooden box was found in the melting ice of the Lendbreen pass, it was intact with its lid and leather carrying handles firmly in place. Archaeologists at first thought it was a tinderbox, probably from the Viking era or Middle Ages, that was lost by accident on the pass. Analysis of the contents has revealed that it is in fact a candle box. The pine wood of the box was radiocarbon dated to 1475-1635.

The wooden box was one of more than 1600 artifacts discovered in archaeological surveys of the rapidly thawing ice since 2006. Fragile organic materials including wood, leather and textiles survived for thousands of years, frozen in the ice. The candle box joins exceptional finds like the Roman-era tunic and a horse snowshoe.

Candle boxes were commonly used in Norway to transport expensive beeswax candles between seasonal farms. This was a practical aspect of the Norwegian practice of seterbruk, or summer pasture farming. Farmers would move their livestock from their home farms to summer pastures to graze. The summer farms had spartan living quarters where caretakers, usually just two people, a cattle hand and a milk maid, would stay for the whole season while they tended to the stock, milking the animals and making dairy products on site. This practice maximized the limited resources of a cold, forested and mountainous country, giving farmers access to larger grazing areas not available on the home farm and allowing them to harvest hay and fodder to supply the farm during the long winter.

The livestock were led over over tracks and passes, sometimes very long distances. They had to bring the basic necessities with them on the journey. If they were lucky they had pack-horses. If not, schlepping the food and supplies they needed to live was up to them. The candle box held one of those essential supplies, the sole source of illumination for the summer farm workers from early spring until fall.