An olive grove three miles outside the town center of İznik (Nicea) in western Turkey’s Bursa province has proven such a rich source of elaborate Imperial Roman sarcophaguses that archaeologists believe it may have been an ancient necropolis.

The first sarcophagus was discovered in November 2015. Looters had gotten there first, sadly, and in their zeal to steal broke a foot-wide hole in the formerly pristine lid of the sarcophagus. The seven ton marble sarcophagus was raised and ultimately installed in the garden of the İznik Museum along with other ancient funerary monuments found in the area. 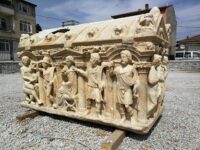 It is an Attic style sarcophagus, rectangular in shape with a steeply pitched gabled roof. Elaborately decorated on all four sides, figures stand out in high relief against an architectural background of fluted columns topped with arched and peaked pediments. Each of the intercolumniations contain a character from Greek mythology. Researchers identified the carvings on one side of the sarcophagus as a scene from the Illiad: Briseis being taken from Achilles by Agamemnon. On the left is Achilles seated on a curule chair (a Roman symbol of political, military and religious power) playing the lyre. Facing him on the right, his hand to his helmet perhaps in the act of putting on Achilles’ armor in anticipation of fighting the Trojans in his stead. In the center intercolumniation is Briseis, the princess enslaved by Achilles after he killed her family and sacked Lyrnessus. She sits on a more simple curule chair and glances outwards. The two men to her right are Talthybios and Eurybates, envoys of Agamemnon who have been sent to claim Briseis for their master to make up for his having had to give up his own war prisoner/sex slave, Chryseis, because she was the daughter of a priest of Apollo and the deity insisted on her return. 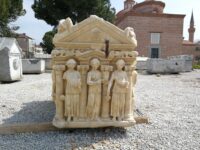 Scenes from the life of Achilles were a popular motif for sarcophagus reliefs, most often episodes that feature death — Achilles slaying Hector, dragging his body behind his chariot, mourning Patroclus — which has obvious relevance in funerary art. The taking of Briseis appears on its face to be a little more obscure a connection, but Achilles’ anger and its massive body count is literally the first line of the Illiad, and his rage towards Agamemnon over Briseis sets off a chain of death, and two of the victims, Patroclus and Hector, are then further outraged by Achilles’ refusal to allow them proper burial.

A year later, police on the search for a stolen vehicle noticed illegal excavations were taking place again in the grove. They alerted museum officials and 24/7 security was put in place to protect the site during the ensuing archaeological excavations. Three more Roman-era sarcophagi were unearthed from the grove in this excavation, including another one with a peaked roof decorated with erotes and botanical akroteria. A funerary stele was discovered near it. Three brick tombs had been built next to the marble one, perhaps the final resting places of people employed by the noble deceased.

The three additional sarcophagi were raised for cleaning, conservation and perhaps installation in the museum, but they might end up back with its olive family. After the 2017 excavation, Turkey’s Ministry of Culture and Tourism tried to acquire the olive grove for the nation. Their offer of 500,000 lira was a distinct lowball, and the owners took it to court. Experts assessed the fair market value of the 10-acre property at 1,094,000 lira, so the ministry had to cough up double to secure the field. The plan is to excavate the grove thoroughly and create an open-air museum featuring its remarkable assemblage of high-end sarcophagi.