A unique lead sheet inscribed in archaic Iberian has been discovered at the site of Pico de los Ajos in Valencia, Spain. While other inscribed lead sheets are known, almost all of them were illegally excavated. This is one of only a handful discovered by archaeologists in a regulated excavation, and its context is of particular relevance here because the paleographic evidence indicates it is much older than the site. 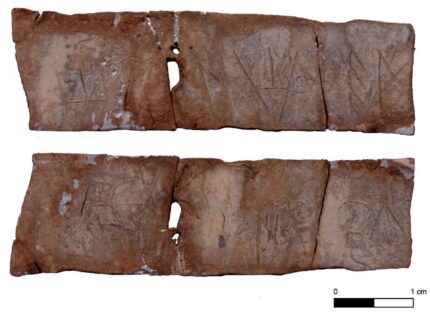 The lead sheet was unearthed in the 2018 dig season at the ancient Iberian settlement of Pico de los Ajos. Pico de los Ajos was a fortified Iberian town inhabited since at least the 7th century B.C. through the Roman imperial era. Lead sheets inscribed in Iberian were first found there in 1979, and their publication the next year unfortunately spurred extensive looting of the site.

The lead sheet, dubbed PA-VII, was discovered in a structure with four distinct spaces on the south edge of the settlement. Ceramics, a coin, and a group of more than 20 bronze, iron and lead pieces were discovered in the rooms. The metal items — a nail, a blade from iron scissors, spatulas, fibulae, assorted fragments — were found in the second space. The lead sheet was among them.

It was folded into a quadrangular shape and covered in layers of carbonate deposits, but some inscriptions were visible to the naked eye. In order to read the full epigraph, researchers had to stabilize, clean and painstakingly unfold it without causing additional damage. Lead is soft and the sheet is less than one millimeter thick. Folded into a square and buried in the ground for thousands of years, the thin metal had deteriorated. It had microcracks, areas of loss, areas on the verge of fragmenting which made it dangerously brittle.

The team was able to clean the surface using fine, soft brushes under a magnifying glass. They then turned a warm air blower on to soften the lead just a little and unfolded the sheet with different wooden instruments. The calcium carbonate encrustation was removed by immersion in a cleansing solution and epoxy resin was used to reintegrate loss material.

Once clean, the full text was visible. Each side bore one-line Iberian inscriptions. Archaeologists believe the two inscriptions comprised a single text, read from side A to side B. 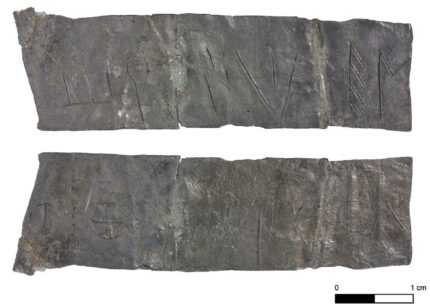 However, although it has been studied phonetically, the message contained in this sheet is not clear and, therefore, neither is the context in which it should be placed. “Iberian is a language that still cannot be translated, but in which experts progress little by little in the identification of words and this helps to interpret what type of texts they were”, explains David Quixal, professor of Archeology and one of the authors of the article. In fact, in this lead it has been possible to identify with enough certainty the name of a person, tořaibeleś , presumably the author of the text or whoever commissioned it.

The sheet has no full parallels among Iberian lead sheets. It features a unique combination of features including its diminutive size, the folding and the integral short text on both sides. The closest cognates are plates found in the votive well of El Amarejo, but they are only inscribed on one side. Even so, it seems likely this sheet had a votive purpose as well, as its text and morphology rule out that it is correspondence, commercial or a label.

The paleography of the inscription is also different from other inscribed leads found at the site because of its age. It is an archaic variant of Iberian from the 4th century B.C., while the inscriptions on previously discovered leads are typical of the more modern Iberian of the 2nd-1st centuries B.C.

The metal pieces that included the folded lead inscription discovered in the auxiliary building were all broken, bent of fragmentary. Archaeologists believe they were scrap collected and stored for later reuse, which is why the lead sheet is so much older than the ones found elsewhere on the site.