The skeletal remains of two close relatives who died 1,000 years ago  500 miles away from each other have been reunited in a new exhibition at the National Museum of Denmark in Copenhagen. The younger of the two was unearthed in 2008 on the Oxford University campus in a mass grave of Danes slaughtered by order of King Æthelred the Unready in 1002. The skeletal remains of his relative were discovered in the town of Otterup on the island of Funen.

The relationship was discovered last year in the course of a large DNA study of the remains of 442 people from the Bronze Age through the Middle Ages discovered in Estonia, Sweden, Denmark, Norway, England, Ireland, Greenland, the Faroe Islands, Iceland, Poland, Italy, Russia and Ukraine. DNA extracted from teeth and femoral bones was compared with DNA from 3855 contemporary individuals and another 922 prehistoric individuals collected in previous studies.

DNA analysis found that the Oxford man and the Funen man were close relatives in the 2nd degree, meaning they were either half-brothers or nephew and uncle. Strontium isotope analysis of their teeth confirmed that they were both born and raised Otterup, but the younger man crossed the North Sea to end up slaughtered in Oxford. The older man died where he lived, on Funen, when he was around 50 years old. 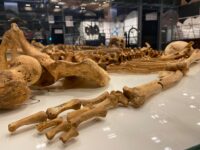 Both of them lived hard lives with plenty of physical labor. They also ate the same type of diet, heavy on the land animal protein with some fish. The Funen man had severely worn teeth and arthritic lesions in almost all of his cervical and thoracic vertebrae, plus in several rib joints, one jaw joint and one big toe. Evidence of inflammation on his ribs suggest he may have had tuberculosis. Sharp-force trauma on his neck had healed, but a second injury on his pelvis had not. It may have been a death blow. Archaeologists hypothesize that he was a farmer for most of his life, but he did see combat on a few occasions.

The Oxford man was powerfully built, but he suffered inflammation on his legs likely caused by chronic sores or repeated blows to the legs. The sharp-force trauma on his body was massive. There were at least nine blows to head by a sword, multiple arrow wounds and spear wounds to his back. The brutality of his death is very much in keeping with descriptions of the St. Brice’s Day Massacre in chronicles and contemporary documents.

The Oxfordshire County Council’s Museum Resource Centre has now loaned the bones of the Oxford Dane to the National Museum where they will remain for three years. The exhibition, which brings together Denmark’s largest group of Viking Age treasures with a multimedia cinematic experience to give visitors an immersive insight into the Viking era, opens on June 26th.