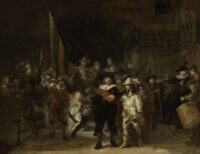 For the first time in more than three centuries, you can see The Night Watch complete as it was when Rembrandt painted it. Even though it was already hailed as a masterpiece upon its completion in 1642, the monumental oil on canvas work was callously trimmed to fit a smaller wall when it was moved in 1715. The Rijksmuseum’s Operation Night Watch team has recreated the lost sections and mounted them with the original so visitors can enjoy the full expanse of Rembrandt’s vision.

When commissioned by Captain Frans Banninck Cocq and the Amsterdam civic militia he led, the Night Watch was installed in the Great Hall of the Kloveniersdoelen, the newly-built headquarters of the militia. It was moved

to City Hall in 1715 and to squeeze it between two columns, it was cropped on all four sides. The right side suffered the least, losing only 7 cm (2.75″). The left side took the brunt of the cropping; the strip removed was 64.4 cm (23″) wide. The top lost 23.3 cm (9″) and bottom strip 11.3 cm (4.4″). This was a common practice at the time even for much smaller paintings. Nobody protested and as far as we know, none of the trimmings have survived although even chopped up Rembrandts were selling for big money by then and one of the strips had two figures on it that would have been saleable. 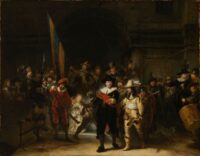 Thankfully, Captain Frans Banninck Cocq had the wherewithal to commission a small-scale (less than 1/5th the size) copy of the painting between 1642 and 1655. It is attributed to Gerrit Lundens who was known for his copies of old masters. It is now part of the collection of the National Gallery. Using the Lundens copy as a guide and using artificial intelligence programmed with high-resolution scan data of Rembrandt’s technique and color use in the painting, the Operation Night Watch team was able to reconstruct the missing sections of the painting at the scale of the original in Rembrandt’s style. The recreated sections were then printed on canvas, varnished and mounted on metal plates for structural support.

You can zoom in on some of the notable details here, and this video gives a great overview of the reconstruction. 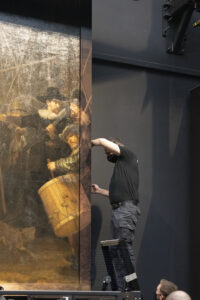