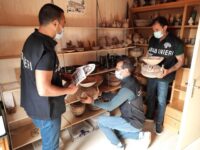 The Italian Carabinieri Art Squad in collaboration with European authorities has confiscated almost 800 ancient southern Italian artifacts from the home of an unnamed wealthy collector in a town near Antwerp. The 782 archaeological objects were all illegally excavated from the region of Puglia. They date to between the 6th century B.C. and the 3rd century B.C. and are worth an estimated $13 million, if their immense archaeological value could ever be assessed in market terms.

This bust was the result of three years of investigation, and it all started thanks to an eagle-eyed conservator. In 2017, a conservator at the restoration laboratory for the Archaeological Superintendency of the Foggia area spotted a stele of the Daunian civilization published in the catalogue of a 1993 exhibition of ancient Italic art at the Rath Museum in Geneva. The stele was missing a central area. The incised design at the margins of the gap completed the design of a mounted warrior on a fragment of a stele in the Archaeological Museum of Trinitapoli.

The Daunian people inhabited the north of Apulia in the 1st millennium B.C., one of three tribes that grew from the union of Illyrian and Mycenean Greek settlers in the region. The Daunians assimilated less with the indigenous Italic peoples than the other two tribes and developed characteristic monuments and pottery unique to them. Of particular note are their funerary steles, made between the late 8th century B.C. and the 6th century B.C. and incised with elaborate decorations representing the deceased. No two are alike and they are very much peculiar to the Foggia-Barletta area that was the epicenter of Daunian culture.

So when the stele in the catalogue picture seemed to be an exact fit for a fragment in the museum, Italian authorities reached out to INTERPOL to find out who this Belgian owner was. His identity determined, the next step was securing a warrant to search his property and recover any other funerary artifacts looted from Apulian tombs.

The stele was found in his possession and it matched the fragment exactly, but that was just the tip of the iceberg. Police confiscated an unprecedented quality of Apulian objects: red-figure, black-figure pottery and geometric pottery both Attic and local, Daunian steles, Greek terracotta figurines, clay heads, winged statuettes. Apulian works with anything like a legal ownership record are vanishingly rare and even the few in major institutions around the world can only be traced to the 1990s, so a full museum secreted in one guy’s house in Antwerp can only have been secured through years of dedicated traffic in looted archaeological objects. He didn’t just amass this number of high-quality Apulian artifacts in excellent condition by browsing flea markets and antique shops.

He, of course, contested the seizure of his looted antiquities, but all of his appeals have failed and the collection has now been transferred to Italy where archaeologists will study and document it thoroughly.