A large building from the 2nd century has been unearthed under a derelict 1930s movie theater in the historic center of Verona. Extensive architectural and decorative elements have survived, as have extremely rare organic remains preserved by the fire that caused the building’s demise. Because it was both destroyed and preserved in a sudden calamity, it’s being dubbed a “Little Pompeii” which it isn’t at all, of course, but the structure’s size, complexity and surviving features make it extraordinary on its own terms. 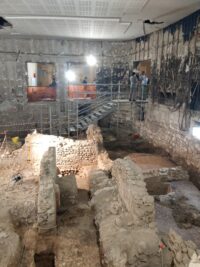 The Cinema Astra has been closed for two decades, home to extended family networks of mice and pigeons who decorated their nest with liberal quantities of guano until it was cleaned as part of a revitalization initiative in 2005. The interior was set to be demolished and reconstructed with multiple commercial spaces, but the discovery of ancient Roman foundations under the theater interrupted the demo. Eventually the restructuring plan was put on hold and the archaeological findings were reburied for their preservation.

Fast-forward 15 years and as of March the refurbishment project is back in gear. In those few months, the excavation has revealed an extraordinarily large and complex structure from the imperial era. Archaeologists found the remains of hypocaust systems for both underfloor and intramural heating, concrete floors decorated with mosaic tiles and inlays. One room was particularly pristine, with brilliantly colored frescoes on the walls, decorated floors visible under carbonized wood from furniture and the collapsed ceiling.

This was probably not a domus or residential home. There’s no peristyle, no internal courtyard, none of the characteristic design of the Roman house. The floorplan and surviving walls indicate the spaces was divided into individual bedrooms, so the going hypothesis among the archaeological team is that it may have been a hotel, and a luxury one at that with top quality decorations and advanced amenities like heated walls.

The fire likely occurred in the late 3rd or early 4th century, based on the ancient stratigraphy of the site and adjacent areas. The wooden roof, carbonized in the conflagration, collapsed to the floor. Archaeologists found it where it fell. Pieces of wooden furniture were also carbonized in the fire.

The date range makes it conceivable that the building was burned down in one of several major clashes between imperial rivals that took place in Verona. Carinus defeated usurper Sabinus Julianus there in 283 A.D.; in 312 Constantine the Great successfully laid siege to the city and killed his rival Maxentius’ most senior cavalry commander Ruricius Pompeianus. After the Battle of Verona, Constantine marched unopposed to Rome and defeated Maxentius once and for all at the Battle of the Milvian Bridge.

If it’s on the earlier end of the range, the building could also have been a sort of eminent domain-type confiscation by Gallienus who in the 260s expanded the walls of Verona to include the arena and created a wide defensive ditch around the walls. Buildings were demolished in the construction, and some were demolished to clear a new defensive perimeter. Hostelries, farms, businesses, homes right outside the walls were sacrificed.

I didn’t write about this earlier because there was only one photo of the find circulating, literally a low-res WhatsApp download spread over the Italian wire service, and it was offensively small and pixelated (see left), but the discovery was opened to the press yesterday so now there’s actual video of the excavation site.